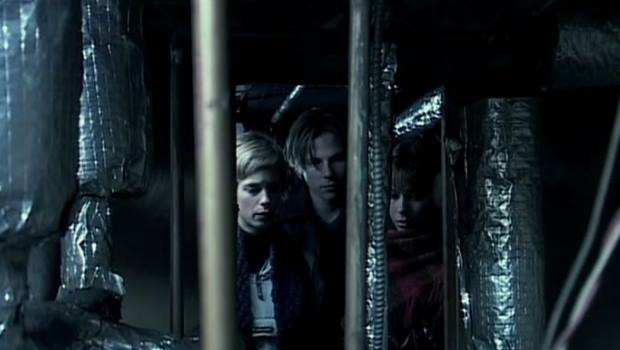 Summary: A spooky horror film noteworthy for its unique style.

The millennial cult of reality TV has dominated broadcasting schedules around the globe in recent years, quenching our voyeuristic desires to observe canned normality in minute detail. Supposedly normal individuals are taken out of context and grouped together in controlled environments (see Big Brother, I’m A Celebrity Get Me Out of Here! Etc) for the purposes of public entertainment. We sit gawping and prodding from the safety of our couches like children aggravating animals in the zoo. Far from displaying reality, these shows are actually full of contrivance and it therefore seems fitting that some of these generic elements have migrated into that ultimate contrived illusion: Cinema.

My Little Eye presents the typical “Big Brother” scenario with all the cosiness removed. Five contestants are brought blindfolded to a secret location (presumably somewhere in the United States) enticed by the $1 million dollar prize fund that awaits them if they can hack it as a group for six months. They only get the money if they all stick it out for the full duration; if one even one of them drops out they all go home with nothing. In a stark and austere country house, desolate and isolated, the contestants discover deep-buried facts about each other as the game show takes on a number of unnerving turns for the worse. Frustration, mistrust and suspicion all simmer over as the contestants put themselves through the emotional wringer.

A serious and disciplined attempt is made at deconstructing reality TV in My Little Eye, in terms of both content and form, by undermining the “its only a game show” mentality that is distilled nightly onto our screens. Here the safety catches are off. The implementation of some established horror film conventions ensures that the contestants are playing for real, eventually becoming little more than pawns made to jump through sadistic hoops by their corporate captors. The stylistic approach is strictly minimal, trying its best to imitate the way Reality TV is shot: multiple, stationery cameras, no external sound effects or music (apart from the opening strains of an internet dial-up tone), all enhance the voyeuristic viewing experience. Even the subtle sound of the camera whirring as it zooms in is apparent, and decidedly creepy. The use of a zero-lux, night vision camera in a number of scenes is particularly effective, capturing an eerie helplessness amongst the housemates.

These formal elements combine to create a vision that is highly innovative but lacking in cinematic gravitas, and this is My Little Eye’s biggest failing. In sticking so faithfully to the mode of delivery utilised by reality TV it lacks the suspense and edginess essential to the horror genre, and becomes little more than a clever experiment. After the initial tingling of anticipation brought on by the sparseness of the location wears off, the series of shocking reveals lack impact when seen from such an arbitrary distance. The point of view shot so often crucial to the horror genre (think Halloween in particular) is absent and this leaves an unsatisfying void where the intimacy should be, ensuring that we do not get the necessary pay off at the scary moments. This coupled with a largely unsympathetic cast of American actors (as if to suggest, bizarrely, that we don’t do the reality TV thing over here?) means that whilst being formally adventurous, and at times creepy in its construction, My Little Eye never manages be truly terrifying.

This is unfortunate because the My Little Eye DVD package is very well put together, enlivened by some novel features that stands out against the standard DVD giveaway ensemble (deleted scenes, trailers, photo galleries…). The design of the DVD has a unified feel, as if the designers have set out to create a package that enhances the viewing experience as a whole, instead of just featuring some tacked-on filler material that should have been left on the cutting room floor. The significant innovation is the “Browser Mode”, wherein the screen becomes an interactive “online” menu that allows the viewer to cut between multiple camera angles and soundtracks when prompted. A particularly nasty commentary is available at this point, supposedly the walkie-talkie chatter coming from the company gatekeepers, which adds a complicit twist to the piece. Also at anytime in this mode the audition tapes of each of the contestants can be viewed, allowing a much needed back-story insight into the egos’ on show.

My Little Eye is noteworthy for its unique style and singular mode of delivery, which I appreciated but didn’t engage with. However, there is little to latch onto from an emotional point of view and the result leaves the viewer flat and somewhat cold at the resolution. Less an indictment of the corrupting effects of reality TV, more a conventional horror narrative misplaced and misfiring, My Little Eye is worth a look, more for the atmospheric DVD additions than anything else.

We are constantly reminded of the fact that we are watching canned imitation-reality, effectively through a metaphorical two-way mirror. The detachment that this causes, whilst bold, allows little personal contact or empathy with those on the other side of the glass.