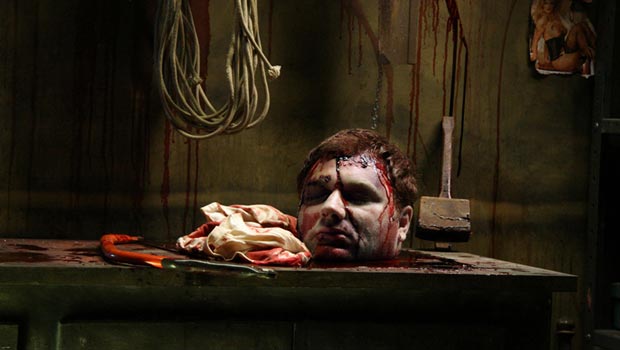 Summary: For fright fans, Mum & Dad will thrill as it makes their skin crawl.

Mum & Dad is the first multi-platform film release, simultaneously available to view in cinemas, to rent and buy on DVD and via video on demand. Partly inspired by real-life serial killers Fred and Rosemary West, it’s a horror film where spending time with family at Christmas becomes a torturous experience. It has got the shock value to be notorious, but is most likely to be a turn off unless you’re a die-hard horror fan.

Mum & Dad claims to be one of the most talked about films from Edinburgh’s International Film Festival 2008 and the UK’s top fantasy and horror film festival, FrightFest, and it serves up a large dose of Brit-shock. Writer-director Steven Sheil’s debut sees young Polish cleaner Lena (Fedori) get drawn into a nasty home life of a twisted family. Mum (Miles) and Dad (Benson), together with their children Birdie (Howard) and Elbie (Alexander) live off whatever they can scavenge from cargo holds, offices and hotels – including transient workers who popular the airport. They imprison their victims in a house full of murder and perversity, and Lena is lured one night after finishing the late shift when she misses her last bus. As soon as she arrives, she realises something is amiss with locked doors and odd sounds coming from the other side – soon it all becomes clear this is not a happy home.

Mum & Dad is a vicious and tough film to enjoy as a result –- making it one for the hardcore horror fans only. Living up to the traits of standard torture porn offerings with innocent victims get body parts hacked off while Lena attempts to survive by staying on the good side of Mum and Dad yet risking the wrath of their increasingly jealous children. The titular characters are the parents-from-hell, especially the overweight Dad with his wife-beating white vest, large glasses and greasy hair ensuring he looks as gross as his violence-obsessed soul. His arguments with Mum reflect the worst parental experiences one can imagine and sibling rivalry is as bitchy as it can be: if this was a nightmare family you did manage to get divorced from, they would still haunt your sleeping hours.

Yet, with all the gritty blood shedding and foul-mouthed fights comes a price for viewers: Mum & Dad is too vile to really recommend to anyone except gore fans who revel in the most extreme of cinema. The links with Fred and Rosemary West will no doubt unsettle more conservative sensibilities, although the intense levels of unease will push the boundaries enough for most people to find the going too tough. Fault can also be found with the script’s reliance on abusive behaviour based on loose plotting but for fright fans, Mum & Dad will thrill as it makes their skin crawl.

DVD EXTRAS
Director and producer commentary, “Through a Vulture’s Eye” – a short film by Steven Sheil, behind-the-scenes footage, cast and crew Q and A at Film4 FrightFest 2008, interviews, theatrical trailer.