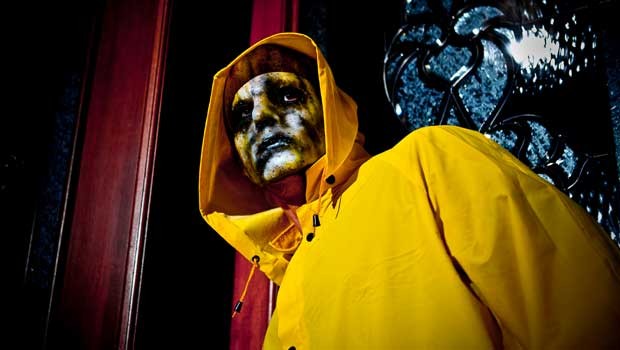 Summary: Mischief Night is the perfect Hallowe'en - or even Guy Fawkes, if we're being patriotic - treat. Enjoy.

I don’t mind telling you that I was pretty much dreading Mischief Night. Gritty Northern drama, film council funding, largely unknown cast – alarm bells were ringing, and my heart sank as I prepared myself for a tedious 92 minutes. Well, my bad for being so horribly judgemental and snobbish, because Mischief Night is a delight from start to finish.

Those of you who have seen Penny Woolcock’s previous Tina films (Tina Goes Shopping, Tina Takes A Break) will be familiar with Tina Crabtree (Hollis) and her unruly brood: Kimberley (Kenny), Tyler (Taylor) and Macauley (Hayward). Dreaming of domestic bliss, Tina gathers her chicks for Sunday lunch which goes badly wrong when Kimberley finds out that her father is not quite as dead as she’d been led to believe. Storming out, Kimberley races across the park which separates the white estate from the Pakistani community, where she and Tyler almost get into a fight with Asif Khan (Akhtar)until Immie (Tikaram) and Tina break it up. Immie and Tina are old classmates; it’s immediately clear that they were once close.

Kimberley is still determined to discover who her father is, and begins to suspect that he may be Pakistani. Venturing back across the park, she meets Asif again. He offers to help her with her search, but he has troubles of his own: after wrecking Qassim (Simpson) the local drug dealer’s car, Asif has been forced to join Qassim’s team of underage smack dealers in order to pay for the damage.

Immie, keen to reestablish his friendship with Tina and otherwise keep his nose clean, is surprised with community elders ask for his help repelling extremists who are trying to take over the mosque. The new jihadist imam is busy teaching the children that Bart Simpson is Satan, but the solution – bring in Qassim and his gang of thugs – seems just as extreme, especially to a man who is trying to go straight.

And all the while Mischief Night is approaching…

To explain: Mischief Night is a Yorkshire tradition, a more extreme version of Hallowe’en, where children are allowed the freedom to be naughty, similar to the concept of carnival; a temporary subversion of the ‘natural’ order, where the decision makers can be overruled. These kids, naturally, aren’t just naughty, they’re quite destructive, with flaming dog poo almost the least that the hapless adults have to worry about. But the kids also possess a wisdom born of innocence; why can’t Muslims and whites be friends?

The film poses an astonishing number of topical questions, but never falters under their weight, it’s always light and funny even while dealing with patricide, radical Muslims, arranged marriage and heroin addiction. Some might find this bizarre, but for me it was a huge relief, and makes perfect sense. Some people might see Beeston as hell on earth, but for Woolcock it’s a sunny place, colourful, full of light and laughter. Its inhabitants are busy living; these aren’t the deserving poor, but real people. It must have helped Woolcock that many of her ensemble have worked with her before, but most of the children make their debuts here and all bring a fresh liveliness to their roles, while Ramon Tikaram is excellent as the confused Immie.

It’s a mark of Woolcock’s control of her material that the characters are so multi-faceted, and that she crams so much story into such a short film. Mischief Night is the perfect Hallowe’en – or even Guy Fawkes, if we’re being patriotic – treat. Enjoy.