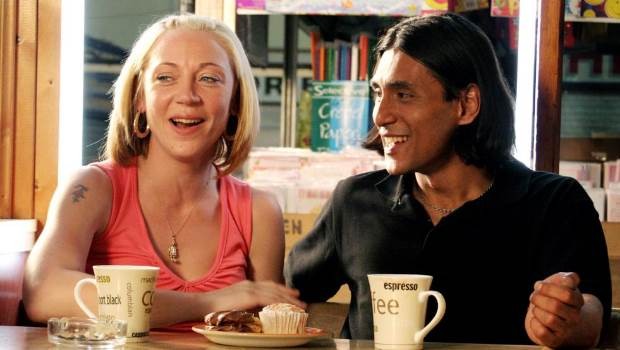 Ramon Tikaram has cut his hair. Now I do know, in the logical bit of my brain, that he isn’t Ferdy from This Life, but I guess that show made such an indelible impression that its hard to believe that the actors have actual lives, but here’s the evidence, coupled with the fact that he is very apologetic for being late, but he had to have a burger, or he would have collapsed. He has been doing interviews all morning for his new film, Mischief Night, director Penny Woolcock’s follow-up to Tina Goes Shopping and Tina Takes A Break. On paper, it sounds disastrous, but it’s suprising, funny, and touching by turns.

‘Penny’s cleverer than that – there’s a heart to her. When I first got the script, I was told it was a gritty Northern drama, ugh. I read two pages and thought, this is good! Twenty minutes later I’d finished the script and rang my agent saying yeah I want to do this, I really really want to do this and then I met Penny. I trusted her implicitly as soon as I met her.’

Mischief Night, being the third instalment in the story of single mum Tina (Kelly Hollis), features an ensemble cast, many non-professional, many of whom had worked together before. But Ramon never felt like the new boy at school.

‘I never felt like the new boy. That may say something about my confidence as a human being. You just sit there quietly and listen and absorb and I felt completely welcome from the start. In the first meeting, I’d learned every single part of the script that related to my character, I was that into it – and Kelly had just looked at it, because of course she knew her character, knew what she would be doing, so she looked at me when I started off without the script, like ‘this is what real actors are like’ and there was this lovely exchange that meant that we were very comfortable right from the start.’

Ramon plays Immie, a second-generation Muslin in the town of Beeston, a community sharply divided along racial lines. He and Tina are old schoolfriends who have lost touch, but clearly were once close; the actors have great chemistry on screen.

‘There’s that thing when you look at someone and they make you smile. That is chemistry, obviously, but there’s something about her which is just so lovely and down-to-earth as well. In this business it’s rare to find someone with real talent but at the same time doesn’t wear that talent off set.’

Woolcock’s practise of using street actors meant that many of the cast were local, and able to dig into their own experiences and memories to find their characters. Ramon, perforce, had to approach Immie a different way.

‘I grew up in the British Army and my dad wasn’t an officer so we always lived in squaddies’ quarters. So I grew up surrounded by people with different accents, and I live myself in Hackney, I don’t like pretty places, so I love this kind of thing. The only difficulty was to try and get that accent, which was a very specific Beeston accent, and in the end I rationalised it, he’d been to prison so many times that his accent had gone weird,’ he laughs.

Immie has quite a dark past, he’s now trying to go straight, and suffering in an arranged marriage with an Urdu-speaking wife straight from rural Pakistan, who his family roundly abuse. He grins:

‘I know, I know, but there is a comic element to the idea of bringing someone from one culture to a completely different civilisation, so alien. I know it’s a tradition, but its absurd.’

The character’s complexity was part of his attraction.

‘Immie is trying to set himself on this course, and he’s been given this wife who he doesn’t even know, because she doesn’t speak English. He kind of has to cosset himself, that’s why he becomes a waiter in a curry house, he can’t do any wrong there and it keeps him out of the house a hell of a long time in the day, because otherwise he’ll have to go back and fulfil his Koranic duty, which is to make love to his wife, who he doesn’t care about. He has this kind of alternative life – all the Pakistani kids in the film do. Existing in two worlds is always going to appeal to an actor. And he has that lovely speech about I just don’t care who hates who or why they should hate each other, and that’s a thing very close to my heart, it absolutely won me over.’

Ramon’s confidence in new situations stems at least in part from his peripatetic upbringing. Born in Singapore, his father was given a new posting every eighteen months, though as he points out, he spent a lot of time in his room because he was a very bookish boy.

‘You learn not to get too loyal to any particular thing; not that you’re flighty and insubstantial, but you’re quietly capable. Some people might say you’re a bit sluggish. “He just sits there, that’s all he does”.’

Some actors might find working with non-professionals a nightmare. He seems to have relished the experience.

‘I loved working with non-professional actors. Everything that comes out of them comes, hopefully, from somewhere real. Its finding those moments of reality, which hopefully also tempers what I’m doing. I couldn’t overact in that whole movie. There’s always a bit of challenge, but at the same time it was very enjoyable. Untrained actors are much more dedicated to the project, and attentive – especially the kids.’

The children in the movie are uniformly wonderful.

‘They’re in their natural element, and they’re not being asked to anything that isn’t them. I like working with them. Drama school kids tend to get very earnest and sincere in a way which doesn’t represent their age at all. You find this especially with American child actors, they have a wealth of knowledge way beyond their years. These guys just have a knowledge of how they exist, and that comes through strongly in the performance.’

The children in the film are an interesting mix of innocence and experience, with Immie’s young brother Asif forced to sell smack for local kingpin Qassim.

The film walks a fine line between dark and serious issues: paedophilia, drug-dealing, racism, poverty – a potentially grim picture of life in contemporary Britain; and the upside, which is this bright sunny world where people just get on with life. It comments, very subtly, on issues as diverse as radical Islam and heroin addiction.

‘People on the ground are just trying to get on with their lives. They don’t think of their lives in the same way as politicians do – it’s like the difference between writing an essay and actually living there. This fear – it just seems to be pick a number – but people just want to get on at a day to day level.’

Ramon waxes lyrical about working on a set dominated by women, and Penny Woolcock in particular.

‘She doesn’t ram it down your throat – and she has a very classical view of film and an appreciation of structure, which completely fits in with the nobleness of what she’s trying to do. She’s an incredibly interesting woman. She commands total respect, as soon as you’re in her presence. So you become very humble, and you just listen. Interestingly, having worked on blokish productions, what I had on this was just this freedom, it was just – gentler – there wasn’t the arrogance, the stiffness. It was just a lovely production to work on.’

He has worked in film, theatre, and television – what does he enjoy most?

‘I’ve just done Gadaffi at the ENO with Asian Dub Foundation and David Freeman directing. It was pretty intense, I had 67 pages out of 93 of dialogue, every night, but at its best theatre is just delicious, because you have that control, that ability to say or do something in a particular way and the audience is with you – the immediacy of the response is beautiful. The rehearsal period is always really hard, you go through periods of great doubt about your ability, whether you’ve created the character you wanted to. Film is therefore probably my favourite medium’ he laughs, ‘because there’s time to redo things – and if it’s a good film with a great story, which this was, I love it.’

In the meantime he’s back on the small screen in Tripping Over, and will soon be seen in an adaptation of Philip Pullman’s The Ruby In The Smoke, with Billie Piper.