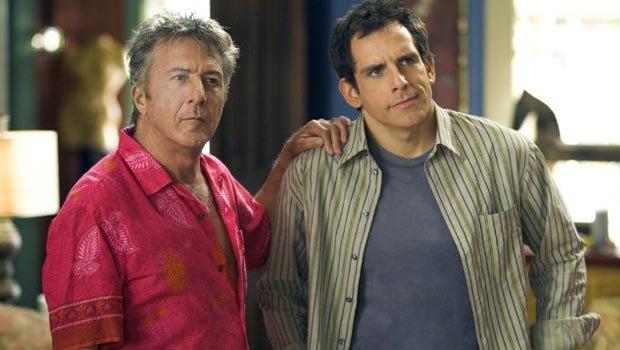 Summary: Meet The Fockers is much more a companion piece to Meet The Parents, riffing on the same jokes and sentiment, in an occasionally routine way, that made the original such a novel surprise.

Payback’s been a long time coming, but in Meet the Fockers (yes, you read it right), the hotly anticipated sequel to the sleeper hit comedy of 2000, familial weirdness flies in from both sides.

Just when he thought he had his feet placed firmly under the Byrneses table, long-suffering Gaylord “Greg” Focker (Ben Stiller) is faced with a whole new world of pain: a weekend away with both sets of in-laws. With a wedding date fixed firmly on the horizon, Greg and father-in-law from hell Jack Byrnes (Robert De Niro) have reached something of the truce, and the fabled Byrnes circle of trust has opened up to include a new member. But after enjoying the relative safety of living hundreds of miles apart there’s nothing like three days with the family to reopen old wounds.

In a good-intentioned get to know you effort, Greg’s parents (played, in an inspired piece of casting, by Dustin Hoffman and Barbra Streisand) invite everyone to spend some quality time at their home in the Florida keys. What ensues proves the point resoundingly that parental peculiarity is completely relative. The tightly wound Byrneses clash immediately with the kooky customs of Mr and Mrs Focker, leaving Greg and his long suffering fiancé Pam (Teri Polo) to pick up the pieces of a mismatch made in hell.

No detail has been spared to ensure that the Fockers and the Byrnes are always at each others throat, and every jaw achingly embarrassing set piece pushes the cork closer to the chandelier. The superpowers, at the height of the cold war would have found more common ground than these two star crossed dynasties. Jack finds it impossible to lighten up in the midst of the colourful Focker’s barrage of hugs, kisses and sexual revelations. We’re submitted to priceless moments of jostling and jousting in the ultimate comedy smackdown between the uptight neo conservatives and the ageing hippies. Even the cat and dog fight like… well… cats and dogs.

Does Meet The Fockers match the original in laughs? The answer is very nearly. In many ways it’s more satisfying, but it somehow lacks the purity that made the original such a smash hit. But then how many times can you remember Dustin Hoffman and Robert De Niro wrestling on screen? There’s something so warmly enjoyable about two great actors who have risen to the top of their trade by playing, in the most part, ultra serious roles poking fun at themselves for 90 minutes. It’s something like the satisfaction you get seeing Tara Palmer Tomkinson covered with bees in the jungle. Meet The Fockers soars on this interplay between the individual performances, particularly within the context of the ceremonial family moments, where everything, from Greg’s foreskin to great sex in your sixties, is discussed with tremulous results. Everyone’s having fun, that’s obvious, and some of the set ups are more than a match for the original, but there’s something inevitable about this sequel that gets in the way of it being a truly great comedy.

I defy anyone not to find it funny, but Meet The Fockers is much more a companion piece to Meet The Parents, riffing on the same jokes and sentiment, in an occasionally routine way, that made the original such a novel surprise. However, it’s still tremendously funny; nervous fiancés and anxious parents everywhere should take note, it could be the perfect place for the bonding to start.