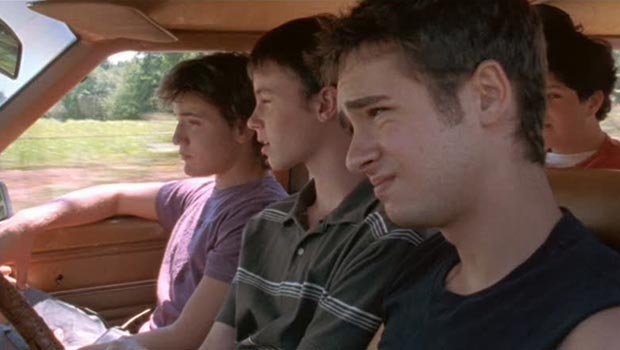 Summary: Josh Peck invests such energy into his performance that George emerges as one of the most realistically complex child characters ever to grace the screen.

Smalltown, USA can be a dark and dangerous place. But behind which doors does the threat lurk and just how much are ordinary everyday folk capable of? These are the questions posed by the outstanding low budget independent feature, Mean Creek.

Teenager Sam (Rory Culkin) is bullied at school by the universally disliked George (Josh Peck). Sam’s older brother Rocky (Trevor Morgan) and his pals hatch a plan to get back at George – not to hurt him, just to give him a taste of what it’s like to be picked on. Using the pretence of a birthday outing for Sam, they all head onto the river for a day’s boating, where they intend to strip him and force him to walk back to town naked. Once on the trip, and having actually talked to George, they realise he’s not simply a meathead bully, but also a lonely and confused teenager whose delight at the thought of making new friends is matched only by his complete inability to interact with them like a normal human being.

He manages to offend each of them at some point, but also shows flashes of humour and fun, and it’s this that causes first Sam then the rest to decide to drop their plan and just enjoy the day. But as emotions run high and events begin to conspire against them, things are not destined to end happily.

From a slim premise, writer/director Jacob Aaron Estes has crafted a beautifully nuanced tragedy, intelligent and grown up while still speaking to youngsters, thought provoking without being preachy. It’s unusual but hugely refreshing to see, in modern American cinema, a portrayal of decent kids who are aware of the implications of their actions and who make moral judgements based on their consequences. It’s this elemental sense of conscience that lifts Mean Creek from what could have been an offensive junior Deliverance into a haunting examination of fate, peer pressure and guilt. That’s not to say they don’t make some bad decisions, including one almighty dumb one, but they make them for the right reasons.

The outstanding young cast helps tremendously. Rory Culkin is very good and fast approaching big brother Keiran’s standard, while the rest of the relative unknowns each bring very important depth to what could potentially have been the usual stock supporters: the girlfriend, the brother, the sensitive one and the hothead. The film is dominated however by the astonishing Josh Peck, who invests such energy into his performance that George emerges as one of the most realistically complex child characters ever to grace the screen.

During the course of the trip, he constantly challenges the patience and sympathies of both his companions and the audience, with his wild swings between thoroughly obnoxious and almost likeable. In less surefooted films George would have been a sneering villain, an easy target of vilification so that we can root for the cute kids and jeer the outsized bully. Mean Creek provides no such comfort, as we alternately wish for the group to accept him or give him a right good kicking. Nor will there be any redemption or easy answers as we slide helplessly towards an agonising climax to a near masterpiece.