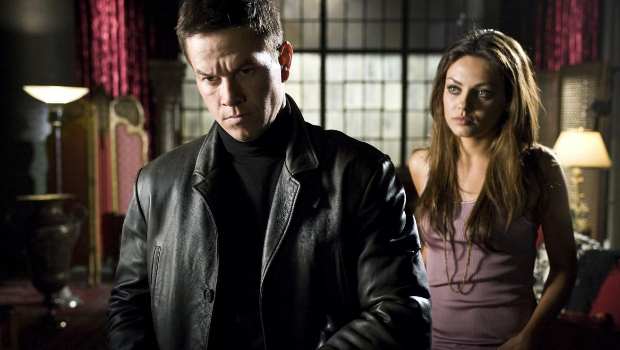 Summary: One to avoid, unless you are incredibly bored and there is nothing else playing at your local fleapit.

If you thought this summer’s crop of blockbusters were a bit lame, wait til you experience what Hollywood is dishing up for us this autumn… Next week, the entrée is Body of Lies, but our turkey of a starter this week is Max Payne, based on the video game and starring Mark Wahlberg as the eponymous hero.

Max is a mopey policeman who, since the murder of his wife Michelle and child has worked cold cases in the desperate hope of finding out who killed them. His fellow police offices mostly ignore him and he keeps himself to himself. No victim support or bereavement counselling in his precinct then, I guess. Max, despite being in an existential funk, decides to go to a party held by one of his snitches, at which he meets the beautiful Natasha (Kurylenko) and her sister Mona (Kunis). Max takes Natasha home, but when she offers to pretend to be his wife, tells her to leave; on her way out she is attacked and killed by a mysterious flying creature.

As the last person to see her alive, Max is the prime suspect, but his former partner discovers a link between Natasha and one of Michelle’s killers; in trying to get this message to Max he is killed. Max then teams up with Mona, who is seeking revenge on whoever killed Natasha, and the two of them discover that the tattoos worn by Natasha and Michelle’s murderer are Valkyrie’s wings, designed for protection. Max makes the connection to Aesir, Michelle’s former workplace (if you know your Norse mythology you’ll have got there ahead of him), developers of the drug Valkyr. Designed to enhance stamina in soldiers, it only worked on 1%; the rest began to suffer hallucinations. Aesir have covered this up, but one of the experimental subjects, Lupino (Nolasco) is behind the deaths, and the whole thing is a vast conspiracy.

Confused? Oh, don’t be. It is really quite simple: if you liked the Matrix sequels, dial down your expectations considerably and you might be entertained by this. Otherwise, well, it’s a poorly thought out excuse for lots of bullet time slo-mo gun fights (remember how exciting that was back in 1999), sexy babes, flying monsters, the worst rendered CGI snow I have ever seen, and Mark Wahlberg looking cross. Any thing good about it at all? Well the nightmare world of Max’s drug induced hallucinations isn’t awful. But it just makes no sense and is like a really lame heavy metal music video that goes on too long, with the filmmakers mistaking physical darkness for mental anguish – we get that Max’s world is monochrome, we don’t need to actually see it. One to avoid, unless you are incredibly bored and there is nothing else playing at your local fleapit. Even then, you’d be better off watching The Matrix on dvd. Again.