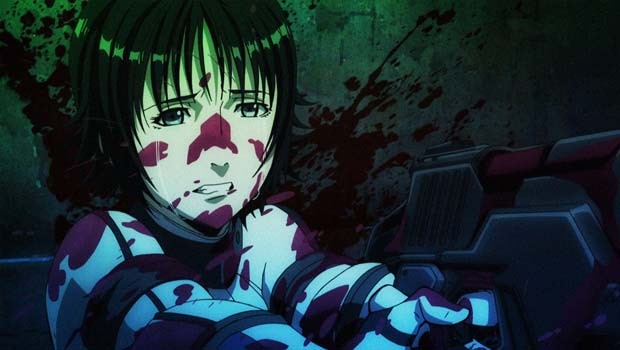 Summary: There's a lot packed in to the 65 minutes here and, though, it seems a little cheeky to offer no more, this will delight cyberpunk fans.

Flashy, futuristic cyberpunk thriller Mardock Scramble is a glossy affair that mixes Ghost in the Shell with Blade Runner for the first part in a trilogy of films based on the novel by Tow Ubukata. Rune Balot, a prostitute brought back to life as a cyborg, is the central character who will remind anime fans of GITS’s Major Motoko Kusanagi with her affinity for talking via her cybernetic inner voice to her shape-shifting robot partner. Together they are out to track down her killer, a madman named Shell who wipes his memory so he can fill the void left with his own desires. This First Compression acts as the opening act of a trilogy of movies and spends most of the duration scene setting but when a group of bizarre maniacs with a disturbing line in cosmetic surgery show up, there’s an action-packed finale which whets the appetite for more to come.

The setting of Mardock City has neon-lit aerial roadways alongside its skyscrapers, though it looks very much like a typical modern city – the advanced sci-fi technology is seen in the recreation of Rune after she is left for dead in a burning car. Her new cyborg body built by pioneering scientist Dr Easter comes after her subconscious makes the decision to live under a preservation order known as Mardock Scramble 09. Once revitalised she is put on a covert investigation into the illegal activities of her killer, assisted by Oeufcoque – an advanced technological partner who assumes the form of a mouse, can morph into weapons and acts as her external voice while she finds her own.

Rune coming to terms with her new being and recalling her past serve up plenty of psychological meanderings with Oeufcoque, particularly what it means to be alive. This makes for a talk-heavy first half of the film which will delight deep thinking sci-fi fans and ensures there is chemistry between Rune and Oeufcoque. Their developing partnership is put to the test in a first action scene with an inventive twist as Oeufcoque helps her defeat a few heavies. All this talking and first glimpse of Rune’s fighting abilities are just a taster for a dramatic climax that sees an oddball selection of surgically-enhanced misfits home in on Rune for their own nefarious needs.

The kick ass end indicates what lies ahead in Mardock Scramble’s next chapter: this is an excellent beginning with eclectic kills, madcap characters and displaying a sly, dark, straight-to-the-point streak to Rune beyond her psychological pondering. There’s a lot packed in to the 65 minutes here and, though, it seems a little cheeky to offer no more, this will delight cyberpunk fans.