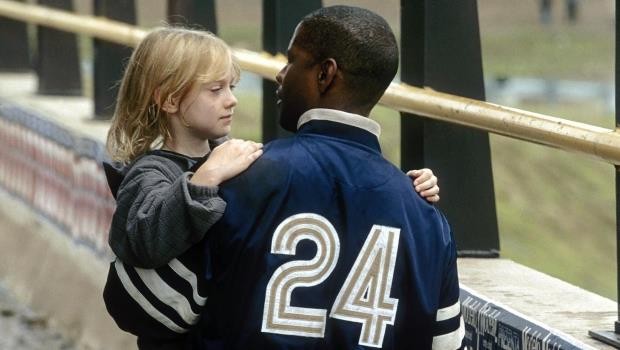 Summary: In short, it certainly looks like someone has been pissing all over Man on Fire, but unfortunately, hasn’t quite been able to put him out.

Looking at the synopsis for Man on Fire, you can see exactly how much of a guilty pleasure this film could have been. In Tony Scott’s Mexican-based action flic, Denzel Washington plays Creasy, a grizzled ex-army veteran, special ops covert assassin type honcho, who visits his old buddy Rayburn (Christopher Walken) in Mexico, looking for work. And work he finds in the form of bodyguard to preternaturally cute but stupidly named Pita (Dakota Fanning), whose American ma and Mexican pa are very worried will get kidnapped and held for ransom.

Although at first understandably annoyed by the precocious Pita, the little girl’s inescapable charms help the walls Creasy has built around himself to crumble away. Having sunk to the lowest depths of alcoholism, even at one point going so far as to listening to Linda Ronsdadt, Pita – sob – gives Creasy the strength to find joy in life once more. In perhaps a slightly unbalanced deal, Creasy helps Pita become really good at swimming.

But then, horror, Pita does get kidnapped, and Creasy takes more bullets than is advisable as he attempts to protect her. When he awakes from his brief coma, Denzel escapes from hospital and begins to wreak his revenge on those who have taken his little angelic salvation.

So, on paper, Man on Fire has the makings of a really good action film with the sweet-sour balance that makes all action films of this ilk such fun: a sickly sweet first half, where hard bastard gets softened up by adorable little person, and a sour second half where said hard bastard ruthlessly dispatches villains in some cracking action set pieces as the body parts and quips start flying about in equal measure.

But this is where Man on Fire comes undone. Because although the first half is indeed sweet, even cloyingly so, with the ridiculously precocious Dakota Fanning getting all gooey eyed over her ‘Creasy Bear’, the second half isn’t just sour, it’s grotesquely bitter. Rather than being coolly violent, the latter parts of the film are just violent, period.

This is because of two serious narrative flaws. The first is that Creasy goes on his rampage before he has fully recovered. As such, continuously bleeding, he is unable to be particularly active for very long periods of time, and certainly can’t engage in a bout of rousing fisticuffs. The second is that, rather than dispatching all the baddies in one go, Creasy has to go from link to link in the kidnapping chain in order to get to the bad guy at the very top. Both of which mean that Creasy, rather than becoming a droll ass-kicking action man, essentially becomes a pretty nasty torturer.

Now, I’m all in favour of graphic violence in the cinema, but it has to have some kind of pay off – it has to be cool, it has to be exciting, and it has to be well shot. The violence in Man on Fire – from a guy having his fingers cut off, to a guy having a bomb stuck up his butt – is none of these things, and is just squirmingly unpleasant. Which means that rather than the normal action film sweet/sour balance, Man on Fire presents a much less preferable sickly sweet/unremittingly and sickeningly bitter balance. Which as you can imagine, is not quite as much fun.

The film’s nasty streak does not just end with its violence. Man on Fire is also depressingly racist. Mexico is presented solely as being an extremely dangerous place filled with greasy, sweaty, corrupt, violent and weak bandits who spend all of their time kidnapping each other. It is often said that a film reflect the fears of the country that produces it, and the fact that in Man on Fire a pretty white girl is having to be protected by a strong black man against nasty South American foreigners, is perhaps very telling indeed.

Both the violence and the racism could be, if not forgiven, then at least ignored if the film was any good. But it’s not. Tony Scott seems to have mistaken a variety of technical jiggery pokery for adequate direction, and the result is a boring and irritating mess, overlong and undercooked.

In short, it certainly looks like someone has been pissing all over Man on Fire, but unfortunately, hasn’t quite been able to put him out.