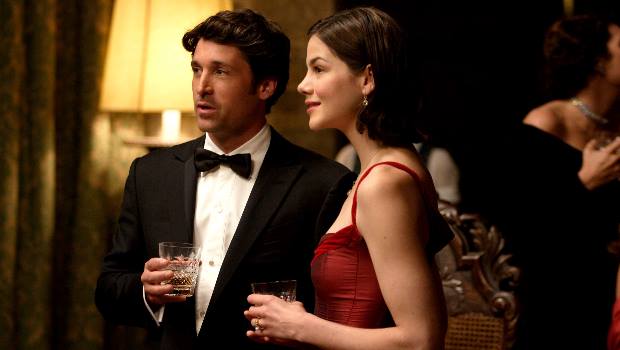 Made of Honour Review

Summary: Made of Honour is charming and sweet and has some genuinely funny moments. It’s a rom-com. It does what it says on the tin.

A lucky star must have been shining on Patrick Dempsey when he was born – either that or a good fairy sprinkled fortune on his little baby head. He’s called McDreamy, for god’s sake. How many men have been singled out for such an accolade?

Patrick, obviously keen to play against type, here plays Tom, the titular Maide of Honour to Monaghan’s Hannah. Tom and Hannah have been best friends since they first met at university, despite the fact that Tom is a philandering commitment-phobic millionaire (he invented the ‘coffee collar’, those eco-friendly bits of cardboard that prevent your hands getting scorched on your grande latte). Tom is convinced that he has the perfect New York bachelor life; girlfriends for sex and Hannah for intimacy. But as his friends point out, what will happen when Hannah gets tired of being Tom’s booby prize and gets a man of her own?

Tom gets a painful awakening (and cracks, thankfully, begin to appear in the carapace of selfishness that he has created around himself) when Hannah is sent away for work. To rural Scotland, the land where mobile phone reception is non-existent. Six weeks without Hannah and Tom discovers that he misses her. That he needs her. That he might have feelings for her. His friends laugh and him and tell him to tell her, tout suite. So when Hannah gets back to New York, bubbling with news from her trip, Tom buys her flowers, puts on his best suit, and walks into the restaurant to find that the news comes in the form of an enormous blond Scot, Colin (McKidd). Colin is in love with Hannah, and they are getting married. In six weeks. In Colin’s winter home, a small castle near his whisky distillery. Colin even saved Hannah from a flock of sheep. Colin is, in other words, perfect.

And Hannah wants Tom to be her maid of honour. Luckily, he doesn’t have to wear a dress. So now Tom has six weeks to convince Hannah that he is really the man for her, despite the lack of castle; throw a shower; shop for crockery; help Hannah pick out her underwear for the wedding night, and not fight or sleep with the other bridesmaids. Will McDreamy be up to the task?

Well, I should blooming coco. (Heh. See what I did there?) Of course he is. This is a rom-com after all, so I don’t think I’m giving anything away there. Rom-coms are about what’s keeping out lovers apart when even a blind simpleton can see that they are meant to be together. (Which is why they are often annoying.) Thankfully Made of Honour doesn’t fall into the annoying category (I would class most Richard Curtis films in this category, also anything starring Meg Ryan in her perky phase). And if most of the credit goes to Patrick Dempsey, not really playing against type at all, then some should also go to Michelle Monaghan, who is just a sweetheart, and Kevin McKidd, playing the thoroughly decent Colin.

If there are any quibbles, it would have to be the generally cutesy and cliched depiction of Scotland, which does not appear to have any cities, and where people dress up as if going to a Renaissance Fayre, toss cabers, talk incomprehensibly, and generally behave as if Bonnie Prince Charlie was still alive (though with better teeth and general hygiene). Hasn’t anyone seen Trainspotting?

But other than that, well, Made of Honour is charming and sweet and has some genuinely funny moments. It’s a rom-com. It does what it says on the tin.