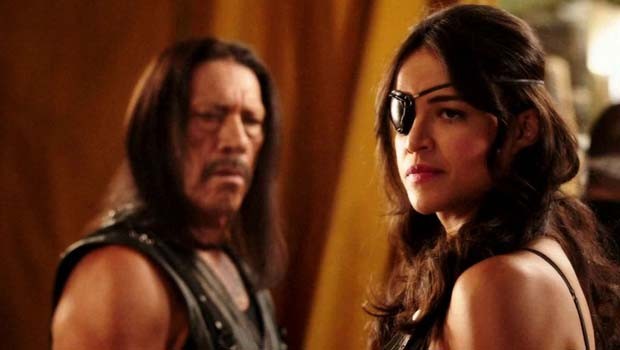 Summary: A nice idea on paper, though there isn’t enough of a plot or characterisation to engage the casual action fan.

You may not realise this, but if you’ve seen the Spy Kids movies you’ll already have seen the Machete character on-screen. You might not remember him as an ultra-violent killer who dislodges the body parts of his enemies with his machete at will though – back then Rodriguez was busy creating a family-friendly fanchise. Now he’s very much in the grindhouse zone – a genre he flirted with for From Dusk Till Dawn then fully embraced alongside Quentin Tarantino for their double feature which saw Rodriguez helm trashy sci-fi actioner Planet Terror while Tarantino delivered a more serious suspense fest on Death Proof. Both were made with their eye on grindhouse cinema – cult exploitation movies that would reliably contain gory violence, nudity and characters who seem to have been lifted out of a adult graphic novel.

While Machete was born out of Spy Kids, he must have begun to take shape as a standalone character thanks to the Grindhouse collaboration with Tarantino: between their films in a cinematic double feature were trailers for fake movies, including one for Machete. Trjo wielded his sword with such poise and the sight of him demolishing the bad guys with aplomb sent fans into overload and they wanted more: Rodriguez saw the potential and so Machete was born: an 18-certificate action-fest loaded with stars eager to get in on the trashy-yet-upmarket fun of Rodriguez’s latest project. Yes it’s a lot of fun and great to see such an illustrious cast get in on the act of making lowbrow cinema with a smile on their face, shame the cult element remains and only fans of the grindhouse genre will be fully engaged from start to finish.

Perhaps the problem with Machete is many of must-see elements are taken care of within the first 15-minutes. Trejo’s cop is set up and betrayed by the man who hired him to assassinate a Texas senator, a scenario that sees him hack through a series of bad guys, slicing heads off and accurately despatching others with well-placed head shots before he finds a nude babe (Mayra Leal) to be rescued. Unbeknown to him, she’s working for his foe Torrez (Seagal) and she strikes him down at the first opportunity so Torrez can safely make an appearance – thanks to a quick call on a mobile phone cunningly hidden in her nether regions. A few snide comments from Seagal making the most of a rare evil appearance and Machete is left for dead only for him to make an escape when Torrez leaves him to die. By now all grindhouse fans will be savouring more, yet the film does little more than follow Machete around as he plots his revenge while meeting an assortment of familiar faces hamming it up and via plenty more dead bodies are left in his wake. A nice idea on paper, though there isn’t enough of a plot or characterisation to engage the casual action fan.

De Niro’s corrupt Senator McLaughlin is a too familiar character while Jessica Alba, Michelle Rodriguez and Lindsay Lohan are there for eye candy – i.e. looking hot while packing heat or disrobing to maintain fanboy entertainment. Granted Rodriguez knows his grindhouse, however Hollywood has been pumping out more glossy offerings for years and Machete’s kitsch value soon deteriorates. Cheech Marin, Don Johnson and Rodriguez regular Tom Savini are stock characters that tick the time along while Trejo gears up for various bloody battles. In terms of exploitation, you’ll get your fill of gritty fights and young nubile women in the model of the grindhouse of old. For recreation and homage of the now-dead midnight movie genre, Rodriguez has to be given top marks; for creating a new action hero, Rodriguez did better with his Desperado trilogy and perhaps he realises that: the next appearance of Machete won’t be in Machete Kills or Machete Kills Again as promised at the end of the movie, rather Trejo will reprise his role in Spy Kids 4: All the Time in the World, a return to the family-friendly genre which will find a wider audience.