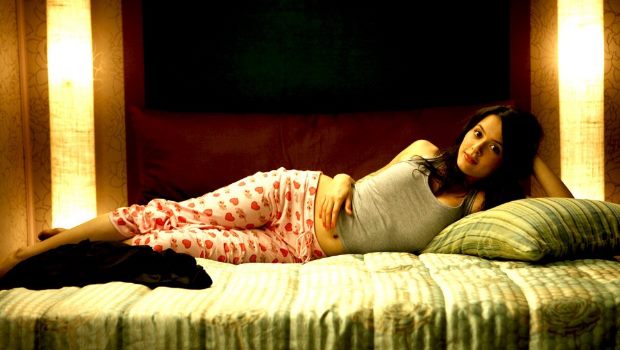 Summary: The movie shows the breaking points of loyalty, love, and friendship, and the darker shades of our protagonists in a non-apologetic, bashful manner.

Luck by Chance heralds the debut of yet another Bolly star-kid. Zoya Akhtar takes the helm at this fresh, brilliantly written story on the inner machinations of the Hindi film industry, Delhi belly and all. Here we see the many hues of ambition, yearning, passion, desperation, duplicity, and oh so many broken promises.

Structured somewhat like Robert Altman’s Shortcuts (though the premise is more akin to The Player) we look at the industry from the perspective of a number of interesting characters, each on their own journey whilst all are striving for the same fame, success and recognition. Vikram Jaisingh (Farhan) is a struggling actor newly-arrived in Mumbai, and is looking for his big break as leading man. On the other hand we have Sona (Sharma) a young starlet in the making, who has headlined a couple of crass (straight-to-DVD-esque) action movies, but perseveres in the hope of her big break, sleeping with a sleazy director over a period of time in lieu of it…

As Vikram and Sona’s paths cross they soon become romantically involved, supporting each other in the joys and pitfalls of their respective unchartered careers. At this point in time at least, their conscience is still very much intact. But Vikram uses his charm, wit and some connivance to tweak some chances at stardom in his favour, integrity for what it’s worth, can take a hike.

When superstar actor Zafar Khan (Roshan) walks out of a major production by old-school producer Romy Rolly (Kapoor), the search for an unknown face to replace the male lead points to Vikram. This is effectively a star vehicle for Nikki Walia (Sharvani) debutante daughter of famous yesteryear actress Seema (Kapadia), who is hell bent on riding her daughter’s success. Both mother and daughter take a shine to the winsome young hunk, not surprising, as all of them think nothing of doing whatever it takes to realize their dreams.

Vikram’s increasingly crafty workings land him the plum role, but not soon after – his dalliance with Nikki becomes the talk of the town, bringing his relationship with Sona to boiling point… In the mammoth diluted world of arclights and silver screen dreams, where friends are utilised, and lovers replaced at the drop of a hat, all of our protagonists (bar Sona) walk the walk and talk the talk. For these guys, the end justifies the means, regardless of the consequences.

This is an utterly compelling, original piece of work that sees the underdog’s perspective with sensitivity, truth, and a whiff of respect. It has the makings and tendency toward parody, yet it treads a fine line and thankfully doesn’t become that, moreso a satire. It’s a great insight into people’s motivations, the notorious ‘couch’, the inanity of superstition, superficiality, the insecurity of celebrity et al. There are plenty of in-jokes, but these we can all get.

The film boasts of some genius cameo’s from the likes of Aamir Khan, Karan Johar, Shahrukh Khan, and the brilliant (Director) Anurag Kashyap as a brow-beaten script-writer. Kashyap is renowned for his infrequent outbursts against hypocrisy in the film industry, and the plight of writers. He’s also incidentally the only Indian director Danny Boyle recently deemed had Oscar potential.

The film is sensitively told and goes a long way to explain the paradox that is Bollywood, with its’ at times absurd workings. It shies away from cliché, leaving in subtle salutes – such as the point where Sona leans down to kiss Vikram and the camera moves out of shot, and focus… The film is also part warm tribute to the industry, which can be seen in the moving opening sequence. The credits play out like a Richard Avedon slideshow with numerous up close and personal shots of real behind the scenes production workers, from spot boys to dancers, light-hands and chai-wallahs to make-up artists. Even here you see the longing, a little desperation, a lot of sincerity.

Zoya is Bollywood royalty (much like those in the film) what with her father being legendary writer and lyricist Javed Akhtar (Sholay, Deewar, Lagaan). Her sibling Farhan is under-played and fabulous as Vikram, even though this cheeky chap later shows little in the way of integrity, you still feel empathy for him through his subtle transition from novice to darling of tinseltown. After the most assured directorial debut in the last decade (Dil Chahta Hai) Farhan has donned many guises in film-making including writer, producer, lyricist, singer and after this and ‘Rock On’ – a very accomplished actor. He seems to be rivalling Aamir Khan in the quality stakes, with a slew of consistently great products, whichever perspective he participates from. Quite obviously, lineage counts for a lot in Bollywood… Konkona is also great in her role, as is Rishi Kapoor who is hilarious as a two-faced old-school producer.

The movie shows the breaking points of loyalty, love, and friendship, and the darker shades of our protagonists in a non-apologetic, bashful manner. Ultimately the movie puts forward the message of following your own path and creating your destiny, with a little bit of luck, by chance. Realistic, a tad idealistic, and a great homage to the hundreds of thousands trying their luck in tinseltown, Mumbai.