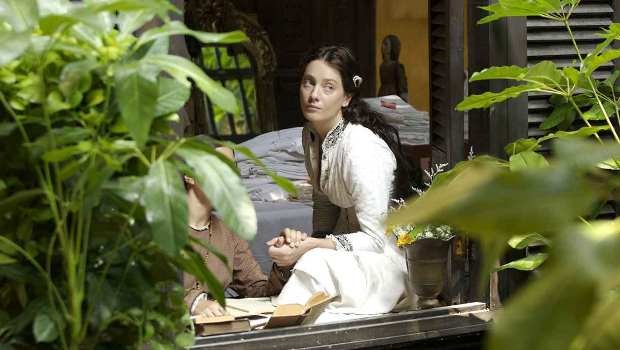 Love in the Time of Cholera Review

Summary: Painfully slow, and full of lines of the standard of “From now on, whenever I smell turpentine, I’ll think of you”, this really is a chore.

Now that Javier Bardem is fully Oscared up, he really should start being more selective in his choice of projects. Following on from his Marvin the Martian impression in the risible period shenanigans of Goya’s Ghosts, we come to the truly hilarious period shenanigans of Love in the Time of Cholera. Sadly, as you may be able to deduce from the title, a comedy it is not.

Based on Gabriel García Márquez’s acclaimed novel, it spans fifty years in the life of Florentino (Bardem) as he pines for the love of Fermina (Mezzogiorno), the beauty he meets as a young man, but seems destined never to attain, thanks to the interference of her father (Leguizamo) and her marriage to a wealthy doctor (Bratt).

Set in Colombia and told mostly in flashback, beginning in 1879, it takes in civil war and the perils of manky water, as Florentino gets over his unrequited love by pumping every woman in the Caribbean and becoming a rich businessman, Fermina meanwhile growing old with her husband despite an unhappy marriage.

Bardem does his best, but he’s woefully miscast as the weak, whining Florentino, though he’s the least of the film’s problems. The old age makeup is of Star Trek standard and the score can’t make up its mind between sultry jazz and pan pipes. The Spanish-speaking actors (and the Italian Mezzogiorno) struggle to get their tongues round the laboured dialogue, while the American actors compete to deliver the silliest accent, although the great Hector Elizondo scores them some points back with a sly turn as Florentino’s uncle.

But the true horrors (and biggest laughs) come from Leguizamo, who spits and froths his way through what seems to be an attempt at channelling Marlon Brando doing Luis Guzmán, with a Kevin Keegan perm all the while. Mercifully he disappears without explanation after about forty minutes, closing off that particular avenue of amusement, but leaving us richer for having lost him (© Patty and Selma Bouvier, 1995).

Painfully slow, and full of lines of the standard of “From now on, whenever I smell turpentine, I’ll think of you”, this really is a chore. Then, just when the flashback catches up to the present and you think it safe to reach for your coat, we’re forced to endure three more reels of the stuff. You may want to take the precaution of smuggling a bottle of putrid water into the cinema with you as an escape route.