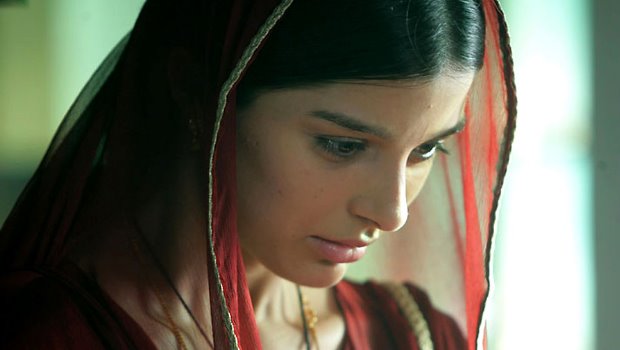 Summary: A valiant effort, but somewhere, somehow, lost in translation.

Love Aaj Kal (Love then and now) is a movie that explores the nature of courtship in ever changing times. A remake of the Taiwanese classic “Three Times”, it’s somewhat endearing, part hokum, but altogether mediocre. Confused and meandering – it tries to be many things, but fails to satisfy the most base of cine-goers.

The movie sees a cocksure Jai (Khan) play a young sales rep in London. Soon enough he bumps into PYT Meera (Padukone) tries some sleazy one-liners, and hey presto – we have our lead pair. But Jai wants to have his cake and eat it too (don’t we all!?). Unable to control his hormones, Jai bores of the ‘commitment’ a relationship holds [no shit Sherlock] and plans a new age ‘Break up party’ with Meera’s consent. They seem to drift in and out of their ‘relationship’ with alarming alacrity, and after all the do we, don’t we – you’re simply past caring.

In betwixt his own love life, he spends an inordinate amount of time with elderly cafe owner Veer Singh (Kapoor), who regales Jai with his own true to life love story. The movie tries to juxtapose Veer’s story with Jai’s, re-assessing the different aspects of love and courting and how they have changed through generations. Interesting stuff eh? Well it sure could have been…

Love Aaj Kal attempts to provide a revealing snapshot into the love lives of the next generation, a world where love occurs on the dance floor and is consummated before you can say “Hello, my name’s…” A place where careers take precedence over love; and no sooner is love lost, and lust is found. This isn’t the coy, earnest, undying love of yesteryear, we’re talking about fastlove. Oddly enough, the flash backs have Khan playing the younger Veer Singh, a very clever ploy which helps draw parallels between the two love stories. But the older story works much better of the two, there’s a lot more sincerity in Khan and Monteiro’s love, and significantly more chemistry compared to our present day leads (Khan and Padukone).

Yet even that can’t save what is a tiresome narrative. The dialogue is ill-devised, the screenplay meandering and senseless. Witty repartee is replaced by nonsensical banter which tries too hard to be funny, and falls flat in the process. The movie tries to portray the kind of insight into modern day relationships, that may leave some of a certain age shocked at the machinations of young people today. With Jai representing this carefree laissez-faire attitude, whilst Veer Singh’s (both incarnations) perspective representing old school romance, and love from another age, where honour and humility are the order of the day.

The treatment is essentially a hash of many Bollywood classics – Dilwale Dulhaniya Le Jayenge, Pyaar Ke Side Effects, and Khan’s own Hum Tum, and hence seriously lacking in originality. Khan seems to be riding on the same rom-com formula and charming, playful, perplexed with the opposite sex character that has served him so well from Dil Chahta Hai through to Tashan. Padukone is pretty infantile in her portrayal. This is all the more disappointing as it comes from Imtiaz Ali, a Director whose short but substantive repertoire (Socha Na Tha, Jab We Met) has shown a great passion for story-telling, and that thing we call ‘love’. With Love Aaj Kal, the paradigm shifts yet further (and disappointingly) towards a more palpable Bollywood ‘formula movie’ with set pieces that do little to progress the story; forced dance numbers; and a predictable albeit (under the circumstances) nonsensical happy ending. What also continues to raise my ire is resident Indian’s perception (and subsequent portrayal) of Asians brought up abroad, it’s pretty superficial so it’d be great if they could get some perspective.

It deserves credit for objectively showing the changing attitudes between generations – without prejudice. Also the soundtrack is fabulous, with the best closing credits in a long time. Undoubtedly its heart is in the right place, and Ali’s movies have significantly more integrity than most, but something is definitely amiss. Beautiful leads and great locales (London, San Francisco, Kolkata) can’t make up for what is ultimately a superficial relationship (it just aint believable!) and hollow journey. A valiant effort, but somewhere, somehow, lost in translation.