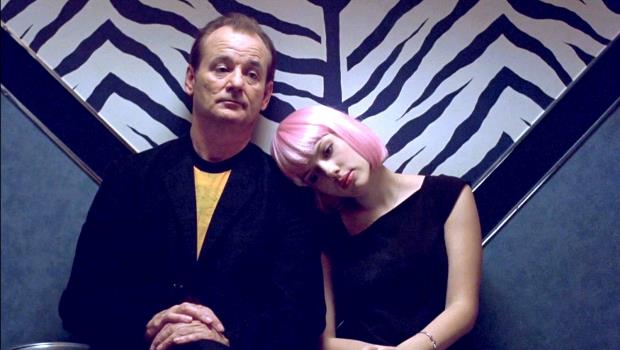 Summary: Lost In Translation is an uplifting film that affects both the head and the heart, and that can only be a good thing.

Now that the battle for Middle Earth is over, and most of the Hobbits have returned to the Shire, it’s great to appreciate that Hollywood can create just as much magic and wonder without the use of fifty thousand rampaging digital orcs. Lost in Translation is testament to this.

Bill Murray plays Bob Harris, an ageing, washed up Hollywood star spending a week in Tokyo advertising ropey Japanese whisky. Although he does not speak a word of the native language, Bob’s confusion lies far deeper; he is lost from his family, who communicate with him from the States almost solely via fax. These messages are not letters of love, longing and affection however; they are inane reminders, pestering him about which colour carpet he would like for his study. Cleary the marriage has reached the point where the thoughts are still there, but the feeling is not.

Equally confused is Charlotte, played by Scarlett Johansson, who has also found herself lost in Tokyo, this time on a trip with her photographer husband (Giovanni Ribisi). Two years into their marriage and it’s already starting to tarnish; unfulfilled by the vacuous souls she meets as part of her husband’s job, her frustrations are exacerbated by the fact that she is unable to work out what she wants to do with her life. It doesn’t help of course that her husband is an idiot, all be it a well-meaning idiot. When he goes away for a few days she strikes up a friendship with Bob and they form a bond which lifts them out from their bewildering milieu and grows into a love that sadly will never develop further.

Already proving with her directorial debut in 1999 with The Virgin Suicides that she is a far better writer-director than actor (after her appalling turn in the flawed Godfather III), Sofia Coppola has excelled herself with this only her second film. With lots of handheld camera work, she creates an intimate atmosphere as the audience follows Charlotte and Bob through a heady night on the town, indulging in booze, dancing and karaoke. By contrast, a great many shots of the city are taken from out of windows and in particular from the windows of moving vehicles, the viewpoint of one who visits a foreign land as a tourist and which adds to the theme that runs through the entire film of being removed and detached from one’s environment.

This is a strong yet gentle piece of thoughtful filmmaking and although it does contain some exceptionally funny moments (one scene in the hotel gym involving Bob and a cross-training machine is up there with the physical comedy of Peter Sellers or The Marx Brothers), Coppola reigns in Murray’s usual sarcastic schtick and as a result he delivers a truly wonderful performance that is warm, understated and charming. It is definitely an inspired turn that should make him a contender for the best actor Oscar but as Murray has openly expressed his utter indifference to the Academy, it is, sadly, unlikely that this will happen. He is however matched by Johansson, who showed real promise in 2000’s Ghost World alongside Thora Birch and now had really come into her own. With her performances in both Lost In Translation and also The Girl with the Pearl Earring, she is fast becoming one of the faces to watch in 2004.

This is a film that harks back to films such as Brief Encounter, with it’s bittersweet themes of love without sex, hope without faith and fleeting happiness without ultimate satisfaction. This is the tale of two souls who have gone adrift, drowning in the ennui of their own lives and yet unable to pull themselves out, until they find each other. Then, for the brief series of moments they spend together, they rediscover what it is to be alive, all the while fully aware that they will soon return to their regular lives and all they will have is a series of precious yet fading memories. While there is a tragic inevitability to the proceedings, ultimately Lost In Translation is an uplifting film that affects both the head and the heart, and that can only be a good thing.