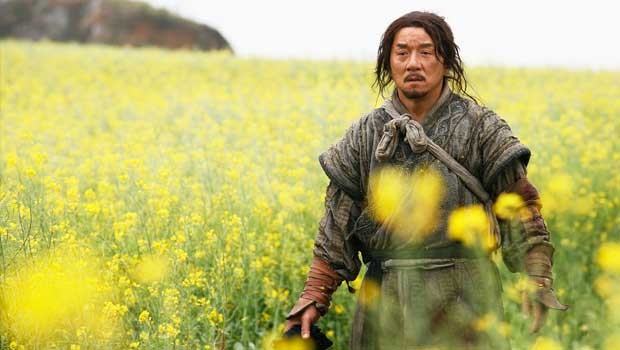 Summary: Little Big Soldier is a little light on depth, but it’s big heart is a winner.

The sight of Jackie Chan playing the clown and singing in a whimsical story of two soldiers finding the way across ancient China with two very different goals brought a smile to my face. Once lost to the land of one-dimensional Hollwood action fare playing the quirky foreigner with martial arts skills, Little Big Soldier is a welcome return to his homeland movie making where he gets the laughs for doing more than just misunderstanding situations or mispronouncing names. Here he plays a peasant soldier with a shameless ability for avoiding his responsibilities in battle – we meet him lying among a sea of bodies at the end of battle with a fake arrow through his side. He’s a man who shirks responsibility and has a relaxed attitude to military life, until he stumbles upon a “little soldier” among the survivors – the rival army’s warrior prince (Wang Leehom) who he captures with the intention of returning to him to his city to collect a sizeable bounty.

The journey to Big Soldier’s home is littered with amusing interplay between the pair as they seek to understand each other’s backgrounds and put meaning into the wars going on across China as warlords fight for control. They make for a fine pair with Little Soldier’s attempts to escape Big Soldier’s relaxed take on how to transport a captive are foiled but the action hots up when nomad warriors and rogue forces led by the prince’s brother seek to track them down. Chan plays down his real martial arts skills in favour of stuntplay and the odd skirmish which sees him rely on his trademark blend of slapstick and improvised props. You can tell Chan is in his element, and as he wrote the original story as well as getting the chance to flex his vocal chords on the soundtrack, his dedication to the film shines through.

There are comparisons to be made with Jet Li’s epic Hero to be made at the end, though this is far more laidback viewing than Li’s overtly serious role and lacks the visual impact of Zhang Yimou’s style. Still, Little Big Soldier’s charm is in its more innocent style that doesn’t play up to a grandiose message. It’s fun and makes you smile throughout – a reminder that Chan’s charisma lights up the screen, especially in more modest movies than he’s been famous. Little Big Soldier is a little light on depth, but it’s big heart is a winner.