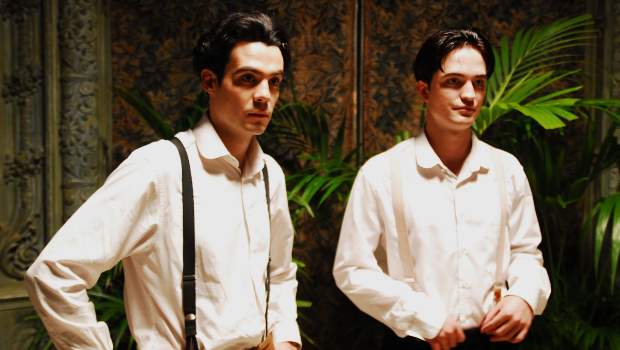 Summary: If you want to see Robert Pattinson naked… well, here’s your chance.

Oh dear. Fans of Twilight’s Robert Pattinson, please look away now. I cannot be held responsible for hoards of teenage girls screaming ‘my eyes, my eyes’ after seeing him in some of the clobber he affects for Little Ashes, where he plays Salvador Dali, yes he of the dodgy tache and the eyeball slitting moment. When I saw Twilight in a cinema, a girl just in front of me moaned allowed at ‘Edward’s’ first appearance on screen. Here, kids, you may be moaning for different reasons.

Madrid, 1922, and the young Salvador Dali (Pattinson, complete with Plantagenet bowl hair do, ruffly shirt, breeches and gaiters) arrives at art college where, far from being mocked, he is rapidly initiated into the select ranks of the university’s social elite, including Federico Garcia Lorca (Beltran) and Luis Bunuel (McNulty). The three soon become inseparable; Spain is a country on the edge of change, with traditional values being challenged by ideas of both the left and the right, and these exciting times are documented by Lorca in his poetry and plays. The three are part of a modern elite that also includes Margarita (Gatell), a young writer with daringly bobbed hair; they all regularly meet to drink champagne, discuss ideas, and dance to the latest jazz tunes.

As time passes, Dali and Lorca become increasingly close and Bunuel decides to leave for Paris where he becomes a filmmaker (as you know, I hope!), while Lorca and Dali visit Dali’s home in Cadaques. And one night, swimming in the phosphorescent water, their friendship becomes something else…

The film would have us believe that Dali and Lorca would have been lovers but for some mysterious trauma that prevented Dali consummating their physical relationship. But more to the point, as far as I was concerned, was why would Lorca have wanted to? Dali, as portrayed by Pattinson, is charmless, selfish, vain and above all dull. Duli, in fact. He looks like a bizarre Pierrot. Their relationship is a soppy romance, all Brideshead style cricket jumpers and cosy bike rides and horridly complicitous well if I can’t have sex with you I can watch you having sex with someone else before running off to Paris and becoming a celebrity artist with a crazy mustache.

Annoyingly, Beltran’s Lorca is both charismatic and interesting enough to carry half a dozen films and it’s a shame, as so often, that filmmakers don’t have the courage to winnow away the chaff and focus on the real. Lorca’s rebellion against Franco, his bravery in defying the army, his passion for his work, the fact that his plays are still being performed, in English, in London, with Gael Garcia Bernal – why isn’t Lorca’s story enough? Why bring in this spurious and frankly not very exciting – and historically undocumented – romance? Oh, I know why. But it is such a pity, as I don’t think it does anyone any favours – least of all the audience. If anything, it sullies both the artists’ names. But if you want to see Robert Pattinson naked… well, here’s your chance.