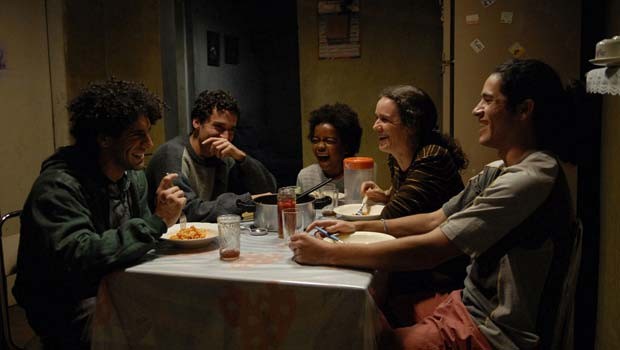 Summary: It’s a gentle exploration of a hard-knock life, with little reward or consolation, but with humour and affection.

Brazil: dusky beauties on Copacabana Beach, quaffing capirinhas? Or City of God style favelas, where toddlers gun each down with equanimity? These are the images of the country presented by the tourist board and the cinema; Walter Salles, with his co-director Daniela Thomas, seems keen to show that Brazil, like most countries, is more than the stereotype.

We open to moaning; it is coming from Clueza (Corveloni), in the early stages of labour. From these first shots, its clear we’re not on Copacabana. This is Sao Paulo, in the winter, gloomy grey skies and Clueza and her little family – Dario (De Olivera), Denis (Baldasserini), Dinho (Rodrigues) and Reginaldo (Santos) – are just about keeping it together, despite the odds. The boys all have their own ways of getting through the day: Dinho has become a member of the Pentecostal Church, Dario dreams of playing football professionally, Denis struggles to make enough money as a courier to support his sickly son, and Reginaldo, whose father is black, searches for him. All of the boys are looking for a father, with little hope of ever finding one.

Their mother does her best but, with a baby on the way, she is worried that she will lose her cleaning job. She is also concerned about Reginaldo who is getting into endless fights at school, and is even bullied by his half-brothers. Though in their defence he is a little snot at times, he also suffers casual racism from all around him, including his own mother, who abuses him as a nigger when she is angry. And then there is the matter of the blocked sink…

From the Motorcycle Diaries to motorcycle couriers, Salles uses the motorcycle here as an emblem of Sao Paulo itself, as well as a visual metaphor for the lives of the four brothers, crisscrossing the city but seemingly going nowhere. Denis is lucky to have a job, but can never make enough to change his life, until in desperation he turns to low-level crime with its greater rewards and attendant risks. Dario is a good footballer, but at 18 is too old for tryouts, and is competing with two million equally desperate youngsters for a handful of places. The only way he stands a chance is through bribing the scout, and where is he going to get the money? Dinho has found a home in the church, but even he can see that the promised miracles are not forthcoming, and is torn by his physical desires. And Reginaldo spends his time riding the buses in the vain hope of recognizing his father, a bus driver.

Not a lot happens in the film in the sense of story arcs. It’s as freewheeling as Denis’ motorbike, but nonetheless rewarding, with an almost documentary feeling at times, showing another side of Brazil. These people are the urban poor – not starving, not dirt poor, there’s money for food and basics, but nothing more – and their life is thrown into clear relief when compared with Clueza’s employer’s apartment, all plate glass and white leather sleekness. It’s a gentle exploration of a hard-knock life, with little reward or consolation, but with humour and affection. And great music.