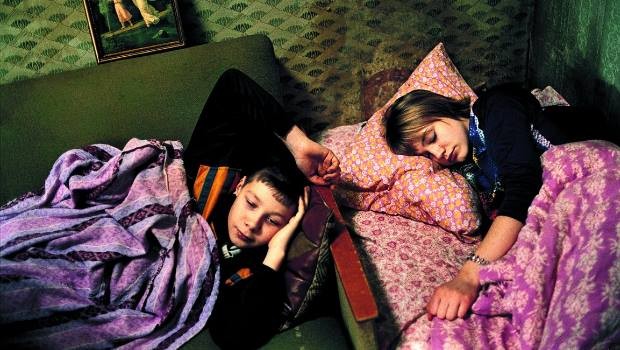 Summary: Moodysson attempts to reiterate that cinema hasn't fully lost sight of its ability to confront and reflect the harsh realities prevalent in modern society.

Moodysson has drifted into darker waters with his latest film Lilya 4-Ever, a brutally stark, uncompromising tale of one lonely Russian girls’ desire for a better life turning into a living nightmare. Absent are the gentle stories of human interaction which comprised his first two features (Show Me Love and Together) in Lilya 4-Ever the human condition is not so much explored as subjected to episode after sickening episode of torture and abuse. Purgatory is transposed to modern day Europe.

Doesn’t sound too appealing to watch? Well I for one believe discomfort is often a positive thing to be felt in the viewer. Moodysson believes he has made an important film, and he is not ashamed to over-state the case. After witnessing the barrage of psychological blows expressed with brutal realism in Lilya 4-Ever, it is hard to find grounds to disagree with him.

A spiral of events spanning nearly two hours of screen time and three months of story time hurtling directly for the floor is set into motion as 16 year old Lilya’s (Oksana Akinshina) mother and stepfather leave Russia for the United States, without the intention of ever taking the adolescent with them. Lilya’s wide-eyed anticipation of swapping a dismal Post-Soviet Union council estate for the allure of western society soon dissipates, as she is quickly forced to reckon with the harsh reality of living alone. The windswept low-rise tower blocks appear desperately grey and endless, row after row of identical concrete coffins concealing any possible route of escape. The vulnerable and isolated Lilya becomes swiftly entangled in the complicit and deceitful world of international sex trafficking. Initial forays as a prostitute, looking for business in local nightclubs, leads eventually to Lilya’s innocence being systematically and repeatedly exploited at the hands of Swedish customers and their Russian suppliers.

Cut completely adrift from any safety measures, Lilya’s pathetic existence is soothed only slightly through her friendship with Volodya (Artyom Bogucharsky), a kindred soul from her estate who is the subject of domestic abuse at the hands of his own father. Their dreams of a glamorous Western existence, safe under the blanket of consumerism and popular culture, are proven very quickly to be unattainable and stained with lies. In attacking sex tourism head on, Moodysson illustrates clear connections between the commodification of sex and the proliferation of western culture into the former Eastern block. “I’m not going to die, I’m going to America” boasts Lilya in one scene; perhaps Moodysson is trying to say that the two are not that dissimilar.

In the cruellest of twists, Lilya’s fascination with all things American (she boasts about being born on the same day as Britney Spears, though four years apart) is the bait that lures her into further degradation. The charming Andrei (Pavel Ponomaryov) bewitches her with meals at MacDonalds and tales of a new life in Sweden, only to make her less suspicious of his eventual betrayal. When it comes she is sent reeling completely unawares. This is Lilya’s false dawn, by which point any hope of escape is banished, leaving very little but a sense of complete anguish. The viewer has witnessed exploitation in its purest form, presented in a drab and monotonous aesthetic, which is illuminated only in the brief moments of joy Oksana Akinshina’s strong and deeply touching performance as Lilya is allowed to savour.

A devout Christian, Moodysson believes that redemption is present in his film, and that Lilya’s torment in life will be relieved in death. His own faith has clearly provided the emotional crutch which helped him tackle such subject matter, and at the resolution you feel Lilya’s soul has been absolved; by the filmmaker at least. The directors’ final dedication to the children of the world embroiled in the illegal sex-trade serves as an indication of his desire to do the same for all of them. Lilya 4-Ever is tough going, but it pulls sharp focus on a worldwide web of exploitation that is concealed but ever-present. Provocation is the intent and empathy the method of delivery, Moodysson attempts to reiterate that cinema hasn’t fully lost sight of its ability to confront and reflect the harsh realities prevalent in modern society.