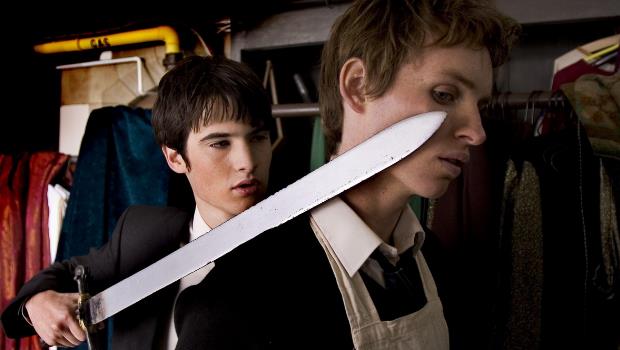 Summary: effective psychological thriller with compelling interplay between Redmayne and Sturridge and a suitably sinister tone throughout.

British boarding school life gets dark and twisted when two teenage boys form a deadly friendship in Like Minds. Thrill-seeker Alex (Redmayne) is paired up with newboy Nigel (Sturridge) for a dorm-mate by his headmaster father – an ill-fated alliance that ends with Alex being charged for Nigel’s murder. Enter forensic psychologist Sally Rowe (Collette) to question Alex about how and why the killing came to happen and an exploration of the macabre recesses of the pair’s minds. It’s a case of privileged school life bringing out the worst in pupils as Rowe tries to uncover the secrets behind Nigel’s death. The mystery is suitably coupled with a gloomy English setting and eerie soundtrack, but the eventual home truths rely on a shock value that means Like Minds just misses out on providing the crucial final chill.

Like Minds kicks off with Alex sat opposite Rowe charged with the murder of Nigel: the incredibly well-spoken and educated suspect does not want to give much away, preferring to toy with the one person who might be able to help him. To fill in the backstory we are privileged to flashbacks of their short friendship, while Rowe’s interest in the human mind takes her on an investigation into a bizarre symbolic pact stemming from medieval beliefs. The latter serves up a typical slow burning uncovering of clues as she puts in the detective work, but the real intrigue lies in the commanding performance from Redmayne and his interplay with Sturridge.

Redmayne brings out the cold confidence of Alex as the type of guy you would either envy or avoid at school because he’s always trying to make a show of himself in front of authority and outsmart others. With a love for danger that sees him regularly take pleasure in hanging off the side of trains to dodge trackside pillars as they speed past, Alex isn’t the most well-balanced individual and the young actors clearly took pleasure in playing the gleefully awkward son to a father in authority. Sturridge brings a methodical approach to the sullen Nigel, the quiet intruder into Alex’s world with a suitcase full of stuffed animal skins. Playing up an uneasy understanding of each other, an unlikely relationship develops when Alex is given a glimpse of Nigel’s ruthless side and ensuing creepy interference into his life. Together they build a menacing atmosphere as the events leading up to Nigel’s death approach.

Yet, when they do arrive to coincide with Rowe’s uncovering of Nigel’s secret past, they aren’t nearly as clever as writer/director Read would like to think they are. Opting for sudden twists and a rising body count to jazz up the final 20 minutes, it feels out of place given the methodical approach to the 80 minutes preceding them. The detour does not take Like Minds completely off course, though. It is an effective psychological thriller with compelling interplay between Redmayne and Sturridge and a suitably sinister tone throughout.