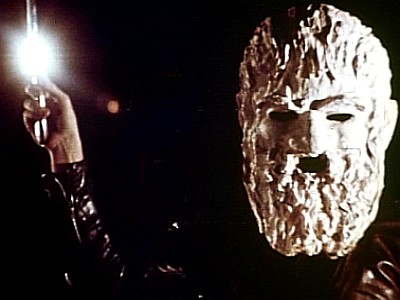 Video Nasties was an apt name for the slew of extreme horror films that emerged in the late 70s and early 80s; not only because they delighted in blood, gore and cheap nudity, but because most of them were just plain horrible. While it may be true that a very select few, like Evil Dead and its sequel, were great films and some, such as Driller Killer, were pretty good, the vast majority were so bad it’s a wonder their creators didn’t shoot themselves in the head upon viewing the final edit. Last House on Dead End Street is a case in point.

It gives testimony to the wisdom that some things are best left alone. For years the film enjoyed a cult reputation. Through the anonymity of its cast and crew – none were credited – a heady rumour was cultivated that this actually was a bone fide snuff film. Now, with this DVD release, that shroud of mystery has been torn off and the urban legend is revealed as nothing more than an inept student film.

The plot, such as there is one, sees hoodlum Terry Hawkins (Roger Watkins) back on the streets – after spending an entire year inside for drug dealing – and eager to revenge society by making snuff films. Elsewhere, a group of rich perverts are finding it increasingly hard to get their kicks now that one of their wives blacking up at parties and getting whipped on the carpet no longer cuts the mustard. Hawkins’ films provide a boost to their particular peccadilloes. He (for some obscure reason) believes they’ve double-crossed him and takes bloody revenge.

The 77 minute film we have here was cut down from its original running time of 173 minutes, so perhaps Last House works better in its entirety. I’m only saying that to offer the slight possibility of a reprieve, of course, I don’t believe it for a second. The severe cut was no doubt an act of mercy, not some Once Upon a Time in America style butchering.

No, the only thing I was left wondering as the credits rolled was: How does the second series of Twin Peaks remain unreleased on DVD when this piece of crap receives a two-disc collector’s edition?