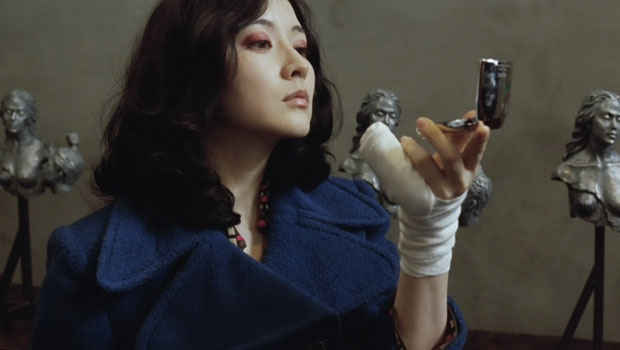 Summary: The film has a very dark, sinister edge to it, interspersed with moments of real emotion and raises interesting questions about how we deal with fear, resentment and anger.

There has been a wave of Asian movies crashing onto our cinema screens of late, and riding atop that wave is South Korean director Park Chan-Wook.

His latest brutally evocative piece is Lady vengeance, which like his other movies Old Boy and Sympathy for Mr Vengeance is about revenge.

The story revolves around Geum-ja (Lee Young-ae), a beautiful girl who becomes a public figure of notoriety when she is arrested and charged for the abduction and murder of a six year old boy. But there is a question mark over her true role in the crime and after 13 years in jail, Geum-ja seeks revenge on her former teacher, Mr Baek (Old Boy’s Choi Min-sik).

There are moments of brilliance in this film; one of the final scenes has the parents of murdered children reaping revenge on the killer in brutal, and at times comical fashion.

Like Old Boy, the film has a very dark, sinister edge to it, interspersed with moments of real emotion and raises interesting questions about how we deal with fear, resentment and anger.

Chan-wook himself is at pains to stress that in real life he is not a violent person and that he has suppressed his anger and hatred all his life, which he believes could be the reason why he wants to express these feelings in films.

Unfortunately what lets this film down is its over use of editing, determined to cram as much information into the plot as possible by skipping from one scene to the next. As a result I was left rather confused as to who was doing what and why, and there was never any clear explanation given for the killers motives.

This feeling of detachment from the characters, including the leading lady, affected my judgement of what potentially could have been a classic film. Despite willing it to succeed, this film is no match for Old Boy, which left me breathless and astonished at its true audacity to tackle the issue of incest in such a shocking way.

As Chan-Wook so beautifully explained recently: “I don’t know how people can find fun in watching mindless films. If you want a peaceful rest, have a bath.”

Related:
Revenge is Sweet: An interview with Park Chan-wook