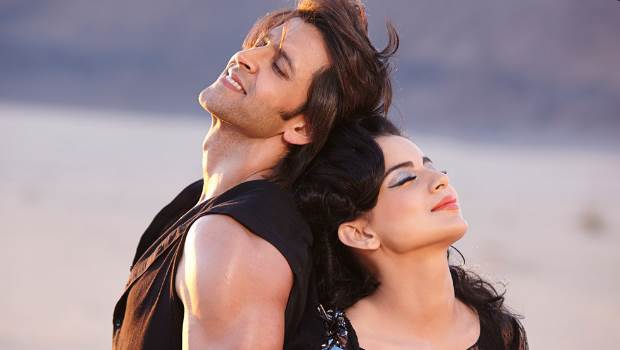 Summary: Bollywood through and through, but a noble and innovative attempt at a typically alien genre.

Ladies and gentlemen may we introduce India’s first bona fide superhero. Bona fide not simply because he’s always late, but he sings, dances, is extremely emotional, and his name’s numerologically correct too (spelling-wise) and what a difference the extra ‘R’ makes…

KrRish is the sequel to the hugely successful Koi Mil Gaya (I’ve found someone). An E.T. adaptation in which an alien being doesn’t just come to earth, get left behind, and befriend a boy… but passes some of his special powers on to him. This happened in the first instalment when small blue midget Jadoo passed on some of his magical powers to Rohit (Hrithik).

Fast forward twenty years and Krishna (the now deceased Rohit’s son) played by Hrithik again, is being looked after by his grandmother Sonia Mehra (Rekha). When she realises his powers to be much stronger than that of Rohit, she takes him far away to an idyllic isolated hill-town, as she doesn’t want to attract attention to him or his unique abilities. She doesn’t want him exploited the way her son Rohit was, and lost to a selfish opportunist world. Unbeknown to his grandmother, here in secret he hones his skills, running faster than horses, jumping aloft mountains, and walking on water. He trusts animals and nature as his sole companions, and in return they befriend him.

Chance encounters with a tourist group introduce him to Priya (Chopra) slowly but surely a love story ensues, and circumstances take him back to her in Singapore. Like the Peter Parkers and Clark Kents before him, Krishna becomes Krrish. In a transition something along the lines of Tarzan to Batman, a new superhero is born. In the second half the movie shifts gears from carefree romance to pvc-clad extravaganza, interlaced with breath-taking action sequences; and so begins a journey we are more than happy to be a part of.

Krrish starts off as a love story, switches gears to become a traditional superhero saga and concludes as a clash between the virtuous and the corrupt. This movie stretches reality magnanimously (superheroes anyone) but it bloody works, and how. This is a mellifluence of Superman, Spiderman and The Matrix – seriously, it has pilfered a tad from all of these. Combine this with state of the art special effects and authentic eastern wire-work choreographed by Ching Siu-Tung (Hero, House of Flying Daggers) and the package is very attractive. It ticks all the “superhero” boxes including missing parents; looked after by elderly family; struggling to come to terms with ones power / keep identity hidden; pursued by a megalomaniac villain on a conquest to take over the… I think you get the picture.

Hrithik breathes life into Krrish: When he flies, glides, walks through fire, you don’t doubt it – you simply do believe it; you believe in him. He plays Krrish as a naive idiot-savant, immensely intelligent and yet incredibly ignorant / childish at the same time… That Hrithik can act is given, he’s strong, intelligent, sincere, and has bucket loads of integrity – this shines through in Krrish and works because of him. He has the body of an Adonis, sculpted from clay it seems, and simply looks phenomenal. In flashback sequences where he doubles up as his father (Rohit from the prequel) he again proves his mettle portraying a gifted person with a child-like manner. Whereas Hrithik is given little to do in the first half other than smile, fly, and romance the lady, the action quotient soon quadruples in the second half, as does the drama and crux of the story.

Former actor turned uber-successful director Rakesh Roshan once again capitalizes on the colossal popularity of son Hrithik amongst kids. After launching him and following it up with Krrish’s prequel – two of the biggest ‘Hits’ in Hindi cinema, he has followed up with another archetypal Blockbuster. Roshan is one of the few successful film-makers from the 1980’s that has been able to move with the times and continues to churn out hugely successful movies incessantly, whilst never broaching the same topic / genre more than once.

The musical interludes by sibling Rajesh Roshan are under-whelming but help pace the movie, often offering welcome relief at times. Krrish is thankfully a stand-alone film, with little reference to the first. Bollywood through and through, but a noble and innovative attempt at a typically alien genre. It contains the love and romance, the melodrama, song and dance, and the rest in ample abundance… But at its heart is a thoroughly entertaining fun-filled flick.