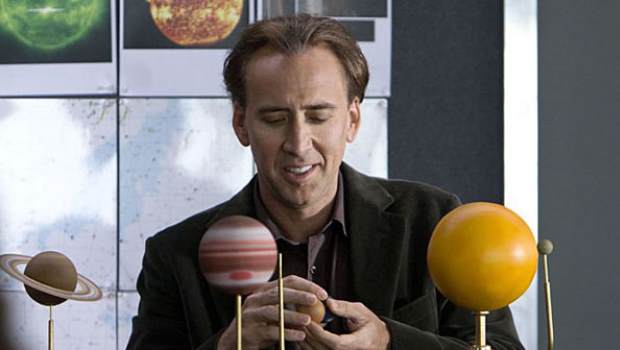 Summary: In the film’s conclusion Proyas undoes most of his good work from earlier, resulting in the disappointing ruin of what could have been a rather thought-provoking story.

Science fiction is a tough thing to get right. Done well, sci-fi has the ability to capture the mysteries of humanity more imaginatively and perceptively than any other genre; Blade Runner, E.T and The Matrix are relatively recent great examples, but these are the exceptions. More often than not, a foolhardy director wades in to a project, convinced that he is making something epic and profound, only to end up with an overblown piece of atmospheric yet meaningless posturing. Such is the case with Knowing.

The story concerns a list of numbers left in a time capsule by a particular primary school pupil 50 years ago. The list gets into the hands of astrophysics professor John Koestler (played by Nicolas Cage, naturally), and he begins to see connections between the numbers and every major tragedy in human history. As he becomes sure of a pattern, John starts to fear that the list also contains predictions of major disasters yet to happen.

An extended historical prologue is unnecessary in terms of understanding the plot, but with his creeping camera and chilling score, director Alex Proyas establishes a note of horror, suggesting that we should prepare for scares as the film unfolds. Proyas takes his time to set up the key themes and players: we see John giving a lecture on ‘determinism versus radomness’; we hear some conversations where issues of faith and unbelief are discussed; we note that John’s son wears a hearing aid, and that people who can ‘hear’ certain messages are being focused on. It is clear that the director wants to grapple with issues of fate and chaos and is inviting the audience to do the same.

For Knowing’s first two thirds he makes good on this set-up, delivering two big action sequences that, while a little CG-heavy, are gripping and spectacular without feeling extraneous to the plot. Proyas presents some striking images in these sequences, most notably in the aftermath of a New York Subway accident, with John emerging beaten and shocked from a dust cloud as the camera slowly zooms out, and we see the extent of the wreckage. An apocalyptic dream sequence is equally powerful and effective. But then it all goes wrong, and what appeared to be a tightly woven plot takes a sudden dive into nonsense of the highest order. Where we could have reasonably expected a logical conclusion (within the science-fiction rules that the film had set up) we are instead cheated out of anything resembling sense.

Perhaps Proyas’ intention was to deliver a killer twist in the spirit of M. Night Shyamalan’s early films, but while he gets the mood right, he has none of Shyamalan’s skill of making the final revelation both surprising and appropriate to what has come before. In the film’s conclusion Proyas undoes most of his good work from earlier, resulting in the disappointing ruin of what could have been a rather thought-provoking story.