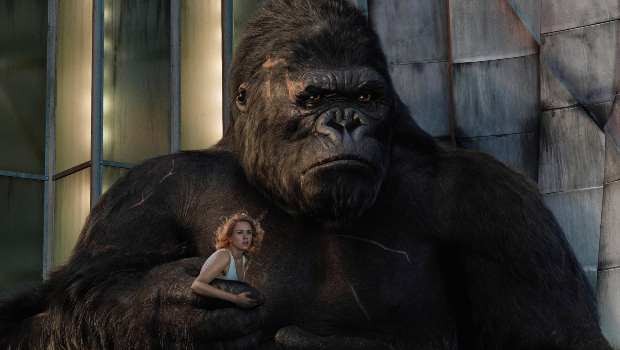 Summary: It’s a great movie, made by the best director in the business who just wanted to honour the film that started his love affairs with cinema.

OK. We’re both busy people so I’ll keep this brief. King Kong kicks the proverbial bottom. Yes, at 3 hours it’s bum-numbingly long, with too much exposition at the beginning and a slightly-dissappointing ending. And for some people who won’t admit that black and white films are generally boring and only say they like them to look cool, a remake of the 1933 ‘classic’ might be considered a little pointless. But this doesn’t negate the fact that for pure, abundant cinematic joyfulness, Peter Jackson’s latest magnum opus rocks out like several large boulders at a Led Zeppelin concert.

The film is a game of three halves. The first bit is very well made but somewhat surplus to requirements, as we follow Ann Darrow (Naomi Watts looking like a healthy Nicole Kidman) picked from the squalor of 1920’s New York to be the lead female role in Carl Denham’s (Jack Black and his amazing acting eyebrows) latest film, which is set in some deserted island ‘near Sumatra’. As Ann chugs along in the boat that will take her to meet her gorilla-shaped destiny, she falls in love with the film’s writer, Jack Driscoll (Adrien Brody, whose nostrils compete with Kong as being the biggest thing in the film), and there’s a whole load of other interesting but pointless bits with young Billy Elliott, Gollum as a lardy chef, and some Scandinavian skipper.

After an hour of this lovingly created exposition, we finally get to Kong’s island, where Ann gets kidnapped by native pole vaulters who look like they run a few stalls down Camden Market, and is offered to the mighty beast as a nice juicy sacrifice. We then get to the middle part of the film, which is worth the admission price of the movie several times over. For King Kong is the best damn celluloid monkey since King Louis suggested he wanted to be a bit more like you-oo-oo. He is by turns terrifying, cute, funny, sad, sarcastic and extremely large. His relationship with Ann is the cornerstone of the movie, and it’s more believable than most modern Hollywood couplings. And as well as adding pathos to the film, Kong also manages to mash up a couple of freaking dinosaurs. Which is pretty damn cool.

The middle section of the movie is an unrelenting hour of action as a seemingly never-ending number of the ship’s crew get chewed, crushed, ripped or sucked to death by the plethora of nasty beasties that plague Kong’s island. It’s just bloody fantastic.

Once Kong gets captured and taken back to New York (exactly how is never quite explained. Maybe he watered skied off the back of the ship) the pace of the films dips a bit, and by now your screaming buttocks might be asking why old Peter spent so much of the film’s first hour not focusing on Kong. Anyway, Denham makes the huge mistake of turning Kong into a public spectacle, and after a disagreement over a share of gross profits or something, the monkey throws a bit of a moody and starts mashing up New York with a joyful abandon. The only person who can calm this raging id is Ann, and the two of them spend a few brief and peaceful moments messing around on a frozen lake in Central Park, in one of the most romantic scenes I’ve seen in a very long time. And then some spoilsport Yankee soldiers start trying to put an end to all of this monkey business by blowing the crap out of the big ol’ gorilla.

You probably already know the film’s ending, which involves the Empire State Building and a bungee jump without the elastic, so I won’t go into it. Suffice to say, Kong and Ann don’t settle down whilst he gets a desk job and she raises their monkey man babies. Be prepared for a few tears before bed time.

So, go see King Kong. It’s a great movie, made by the best director in the business who just wanted to honour the film that started his love affairs with cinema. But if you do go, make sure you go to an early performance in a comfortable cinema and don’t take the kids, because they’ll be asking ‘where’s the monkey’ so many times in the first hour of the film, you’ll be forced to send them back to the car with only a couple of jelly babies to keep them going.

King Kong’s long, you don’t get to see his schlong, it’ll win a few gongs, buy it on DVD and you can’t go wrong. But if you think your ass can take the punishment, do yourself a favour and watch this one on the big screen. You won’t be disappointed.