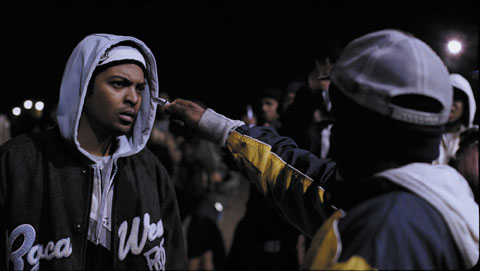 Summary: Director Huda injects a real energy into the film, pacing it almost like a white-knuckle thriller.

So Kidulthood then – the slightly awkward title for this controversy-courting exposé of inner-city British teenagers today. The kind of ASBO-notching, hoodie-wearing, pill-popping, promiscuous generation that frequently lines the pages of The Daily Mail and early-evening documentaries – that’s got to make good cinema, right?

It’s a movie that could easily fall down. How tempting it would be to fall into the trap of leaving any pretence to reality behind in the desire to shock. Or, just as easily, this could have been the sort of finger-waving, preachy little film that you could imagine teachers force-feeding their class in General Studies. And while I’m not saying that Kidulthood entirely escapes either charge, this is a bold, important movie that strikes out like a steel bar through a windscreen.

From the angst of Rebel Without a Cause to the John Hughes comedies of the 80s, rites-of-passage movies have always been popular, often following in a similar vein of awkward romance, painful learning experiences and confrontation with authority. Kidulthood is embedded with all three to some extent, but this is far bleaker than most movies about teenagers. The obvious point of comparison is Larry Clark’s Kids, one of the most fascinating teen-pics of the last decade, which took a detached and apparently non-judgemental look at a nihilistic youth culture.

Like Kids, Kidulthood has a loose, wandering structure. It incorporates the classic ‘day in the life of’ device, beginning with a disparate group of kids getting the day off school after a classmate’s suicide and building up to a much-hyped house party. Along the way there’s teen pregnancy, sex exchanged for drugs, gangsters and violence. All of which is set to a hip Brit soundtrack of Dizzee Rascal, Audio Bullies and The Streets, mostly serving to amplify the events on screen rather than atoning for any lack of substance.

Thankfully Kidulthood (again like Kids) doesn’t work hard to make its characters charming or likeable. Most of the characters here are irritating or downright objectionable, but they also have a compelling vulnerability that makes it difficult not to identify with them. The film also provides snapshots into the adult world that exploits or ignores the kids to varying degrees – parents who don’t pay attention, teachers who don’t wield any control, men willing to exploit their age and social status – leaving the teens to forge a lifestyle on their own terms.

I don’t know how close to the truth Kidulthood really is. I didn’t go to school in inner-city London and it’s been over ten years since I was 15; it’s the people that this movie is about that’s best-suited to judge it on authenticity. This isn’t a timeless tale of growing up like Stand By Me or American Pie – this is a film about a very particular moment in time and a particular place. And in this respect Kidulthood does feel genuine. Writer Noel Clarke (who also stars as the film’s key bully Sam) pays almost obsessively close detail to the characters’ vernacular, dress sense and home life. And just as importantly the film pays attention to the streets themselves. For here we find a set of characters too young yet to inhabit a world of nightclubs and flat-shares, so when they’re not at school there aren’t many places to go other than to aimlessly mooch the streets. One of the joys of Kidulthood is in its perfectly-detailed location filming; this isn’t the processed-cheese London of posh houses, tea shops and tourist attractions of a Richard Curtis movie. It’s the London of drab high streets, tube lines and traffic zipping by. It seems ridiculous, but Britain doesn’t make enough movies that feel like they’re actually set in a Britain that exists anymore.

The other factor that defines Kidulthood is some outstanding acting by its young cast, again not something you can take for granted in a teen film. Red Madrell, Noel Clarke, Red Madrell, Jamie Winstone…it’s very difficult to pick a stand-out. The depths of rage, despair, laughter and cruelty on display here is astonishing to watch, and there are several faces here that, you hope, can help to put a bit of life back into British cinema.

But Kidulthood works primarily because it remembers that it’s a movie and not a lecture. Director Huda injects a real energy into the film, pacing it almost like a white-knuckle thriller. If you stop to think you can pick holes – this amount of bad behaviour and tragedy condensed into one day is a little far-fetched (with the effects of drink and drugs disappearing remarkably quickly when it suits the action). But the film is so tightly edited and visually stylish that the events are always absorbing. In fact the only place where the movie does fall down slightly is an ending that imposes the kind of sub-Shakespearean tragedy element that you hope it’s going to resist – compare this with the much more blunt, effective ending to Kids (“Jesus Christ, what happened?”).

This is a minor criticism in what could be the British film of the year. Whether it will date quickly or whether it will hold up as a defining movie remains to be seen, but whatever side of kidulthood you might reside this is a film that needs to be seen.