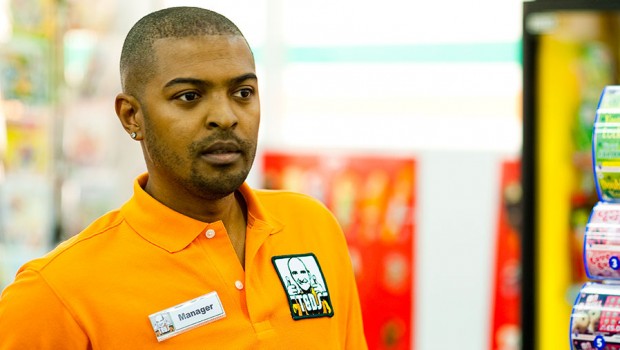 Discussing the influences for his new film 4.3.2.1, writer, co-director and actor Noel Clarke offers some surprising reference points. “Sideways, Garden State, Happiness, Lost in Translation, Sidewalks of New York”, he muses, “films about characters.” If you’ve seen the furiously cut trailer for Clarke’s multi-stranded ‘four girls in action/adventure’ latest you might not immediately see the connection to those films. But Clarke says the heart of the film is who the girls are, not what they do: “Obviously the publicity people have to sell the film, so ‘it’s a diamond heist movie’. Yeah, there’s a little heist in it, but it’s really about the characters, it’s really about the girls’ individual journeys and their friendships. But you know (does ‘trailer’ voice) ‘Friendship!’ doesn’t quite work as a tag-line.”

While Clarke’s admiration for those character-based dramas is clearly genuine, with 4.3.2.1 he is painting with a rather broader brush, and consciously aiming to capture a wider audience. Like his previous film Adulthood, the story centres on young people in London, but here the four main characters are intentionally not a natural grouping. That was the whole point, says Clarke: “I definitely thought of girls that different girls could each relate to. I didn’t want them to be like Spice Girls, but I wanted them to be different enough that when you’re with each girl you’re on her journey and you follow that story. So whenever they’re together they wear clothes that identify them as friends, but as soon as they split up we put them in their character clothes, what each girl would relate to.”

Unlike the average writer/director, Clarke is very upfront about the fact that he shapes his films with a distinct audience in mind. It’s an issue that comes up again when I challenge him on whether 4.3.2.1 really needed the girl-on-girl sex scene that features in one storyline. “There’s a big core following that watch my films that are young male guys. This is a more female-centric film. The scene didn’t offend people enough in test screenings for them to not watch it because of it, but it gives guys who are, let’s say, of the more simpler-minded nature, something to enjoy.” Whether you agree with his perspective or not, it’s refreshing to hear such a plain statement of intent from a filmmaker. He goes on to add, “I also really thought that by having that scene in there we would show something that’s not shown. Whenever I’ve seen stuff on TV or film where it’s girls or guys of the same sex it’s always done in a gritty kind of way. Why can’t it be a bit more sensual? And yes, this is a bit titillating, but they’re in love, they’re not just like ‘let’s just have sex’.”

Clarke is no stranger to controversy – “People always said how Kidulthood ‘glamourised violence’, and my argument was that in real life if someone hits you with a bat you might die. That’s real life, that’s not glamourising” – but he is keen to point out that just because he puts something in a film doesn’t mean he thinks it is acceptable behaviour: “I don’t expect [my son] to behave the way the kids in the film behave. But it’s a piece of film that’s just put out there about the time that we lived in.” Similarly, he has no problems with people taking a different view to his own: “4.3.2.1 is just a piece of art, if you like, for people to talk about, and judge, and criticize or not, and it doesn’t affect me in any way. I’m not concerned by it. And that’s not an arrogant ‘I don’t care what you say’; it’s a drawing of a line. No matter what you do in life, your clothes, your jewellery, whatever, people are going to like it or not.”

But like him or not, Clarke is certainly a force to be reckoned with. Having won the BAFTA Rising Star award in 2009, he’s using the resulting clout to further not just his own career but those of other up-and-coming British filmmakers too, like Mark Davis, the technical whiz with a co-director credit on 4.3.2.1: “I’ve been mates with him for a long time, he’s got the directing skills of Spielberg and the VFX skills of Lucas in one guy. And in a few years time, people will know; there’s a sci-fi film that I’ve written that he’s going to direct.” He also has a comedy script finished, and even a prospective epic that may film in Scotland, an idea that stuck with Clarke after he acted in Neil Marshall’s Scottish-set Centurion (“the vistas where we shot – Lord of the Rings a hundred percent!”) Oh, and he’s a jobbing actor too, we’ll see him next in Ben Miller’s stand-up comedy buddy-movie Huge.

Uniquely among British filmmakers, Clarke is a genuine showman; a constant self-promoter who wants to give people a proper movie experience. “I just want to make films that entertain people”, he says. “You hit the cinema these days you’re looking to spend £70 – your travel, your ticket, you’re probably with someone, girlfriend or wife, you’re probably gonna have a meal after, you’re gonna buy a bunch of snacks in there. If I’m paying £70 for something I want to be entertained! You can buy a computer game for £40 that will last you months.” It’s a sensibility that is rooted in his love for American and international movies – as well as the aforementioned US indies, he cites Go, Pulp Fiction and Mexican cult hit Amores Perros as the chief influences on 4.3.2.1’s multi-stranded narrative – and it is why Clarke is good for the British film industry. His best work is still ahead of him – for all its style 4.3.2.1 is ultimately too confused and insubstantial to be great – but his ambitions are to be applauded, and will hopefully lead to much greater things. “I just want to do something different. I’m not saying that I am ‘the saviour‘, but I know that I can confidently sit here and say nobody makes films like I do right now.”