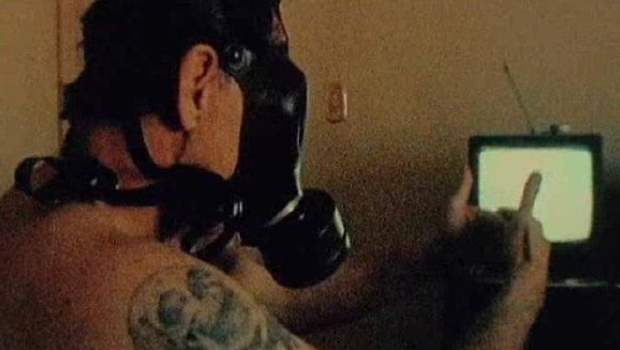 Summary: Replete with improvised dialogue and an outstanding portrayal of schizophrenia, this is certainly a film that will expand your view on the possibilities for mainstream cinema, and is highly recommended.

Harmony Korine is one of the most promising young directors in mainstream American cinema. His first film, the cult classic Gummo, depicted the imperfect underbelly of contemporary American society. Julien Donkey Boy unflinchingly portrays the dystopian reality of the American Dream within the construct of a dysfunctional family. At the heart of this domestic environment is Ewen Bremner’s powerful portrayal of schizophrenic Julien.

The visual style of Julien Donkey Boy is predominantly a fractured collage of disparate images and scenes, ricocheting between jump cuts, freeze-frames and lingering wide shots. This is both representative of Julien’s unstable, chaotic mind but also symbolic of the fragmented nature of the relationships within the family.

Within the fractured visuals of the film is an emotive and humorous tale enclosed within the poignancy of the troubling nature of the families behaviour and lifestyle. Enveloped in the omnipresence of religious beliefs we see people who are deeply disturbed by feelings of loss and guilt. The main source of these emotions is the father figure who inflicts them on his children through ridicule and violence. Wracked by boredom, failure and grief, he is never affectionate but spends his time laying in his room smoking cigarettes and drinking Robotussin from a slipper, wearing a gasmask and a Salvador Dali moustache and dancing to Dock Boggs.

Although it becomes clear early in the film that Julien has serious psychological problems after he kills and buries a young boy, the audience is given the opportunity to empathise with his condition. We witness a caring, funny and considerate man in the sequences of him at the blind school where he works, and in intimate interaction with Chrissy the blind ice-skater and Pearl his sister, who is pregnant with his baby.

Throughout the film it is the people with physical disabilities who are the most joyful and positive. The essence of their strength is the only nuance of salvation at the climax of the film once we witness Pearl’s miscarriage and the sight of Julien under his duvet cradling the dead foetus he has stolen from the hospital.

Julien Donkey Boy is a film drenched in pathos but also the beauty and humour of life. Replete with improvised dialogue and an outstanding portrayal of schizophrenia, this is certainly a film that will expand your view on the possibilities for mainstream cinema, and is highly recommended.