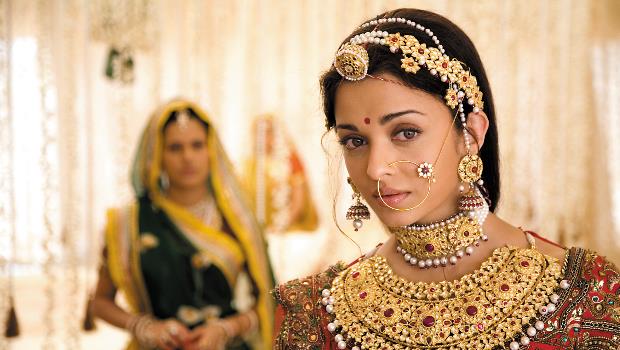 Summary: If you can forgive the running time and the winsome third quarter, this is really worth a dekko.

Sumptuous extravagant grandeur the likes of which we rarely see on celluloid is the call of the day as far as this historical epic is concerned. Set in sixteenth century India and based on the life and times of Mughal emperor Akbar, this epic romance focuses on his dalliance and marriage with Rajput (royal) princess Jodhaa. A controversial union which was more an alliance between two cultures and religions for political gain.

Through conquests that won him the title of Akbar the Great, to winning the love of ethereal Jodhaa, the film traces the impressive graph of the mighty emperor and his romance with the defiant Hindu princess. She agrees to marry him on condition that she doesn’t have to convert to Islam and is allowed to practice her own faith without heed, and here begins the drama…

Akbar became the most prominent of Mughal rulers because of his successes as a monarch. Succeeding the throne at 13, he won his first battle at 14, even then showing himself to be a benevolent and wise ruler. Initially we see Akbar’s army defeat the far superior forces of Hemu Vikramaditya in 1556 at the Second Battle of Panipat. Hemu is brought before Akbar unconscious, and the emperor co-erced into beheading him. He disagrees with this as unjust, uncivilized and against the rules of war; with this we see a new conscientiousness for the emperor, a new dignity in victory.

As the Mughal conquistadors came over from Persia and Arabian lands they took over vast provinces in the Indian sub-continent in usually bloody wars, with a view to steadily building up and consolidating their empire. In situations not dissimilar to the crusades of Europe, many brutal battles were fought in the east against advancing Afghan and Turk (Muslim) armies. From the 16th century these descendants of Genghis Khan conquered and ruled South Asia from Afghanistan to the far reaches of India for the next couple of centuries.

As a Muslim emperor in India, Akbar’s legacy is one of enlightened rule and almost radical religious tolerance; as unlike his predecessors and successors he was tolerant of other faiths. In a highly polarized society, Akbar fostered tolerance for all and encouraged debate with leaders of all faiths. He tried to remove distinctions between Muslims and non-Muslims, courting the favour of the powerful Rajput royals, to the extent of marrying their princesses to ensure peace and consolidation ‘for the good of the people’. A commanding personality, he was fearless of the chase as well as in the field of battle, and likened to Alexander of Macedonia.

This is epic on every scale, each frame dripping with beauty and (thanks to Cinematographer Kiran Deohans and Art Director Nitin Desai) each vista full of glorious colour, passion and spectacle… and simply, a story well told. To say the leads are stunning is stating the obvious, but the sets here are probably the most sumptuous Indian movies have ever seen. From the most lavish gold finery (a whopping 40 kilo’s of pure gold jewellery was used, at a cost of £¾ million) to jewel-bedecked mughal forts, sumptuous palaces to awe-inspiring armies – Jodhaa Akbar has it all, especially a love story which screams largesse. The attention to detail is mind-boggling, but then coming from the director of Lagaan – we expect nothing less.

The story has been excruciatingly etched out and lavishly told, which would explain the nigh 3½ hour running time. It is brilliant in many aspects; there’s never a dull moment with awesome battle-scenes, exemplary swordfights, palace intrigue, author-backed characters and a fitting score by A R Rahman, but then we do have history guiding us. This is essentially a love story at heart, and one which has been stretched to its’ limits in the latter half; a little trimming of the forecourt foreplay would go a long way in making this perfect (whilst saving our rears from a coma).

Rai as Jodhaa is gracious, unsure (as she should be) and conveys her battle within well, while rippling Roshan as Akbar is aptly majestic and performs his role with the élan and gravitas needed for it to be credible. The supporting cast is largely fabulous and appropriately cast.

As stated in the baritone prologue by screen legend Amitabh Bachchan this telling is not entirely ‘authentic’ due to numerous historical accounts of our protagonists and their existence… What isn’t in doubt is the significance with which Akbar was and is held, his prominence as a great warrior, ruler, administrator and king that was able to unite all the provinces now commonly known as India. The movie portrayed him realistically as kind-hearted and noble, though prone to inadvertent flashes of fury and excess.

It doesn’t though fully show his passion for and patronage of the arts, his Navratna’s (close associates referred to as the 9 jewels of his court) or the fact that through his vast reach for secularism he subsequently created his own faith, the Din-e-Ilahi or ‘Faith of the Divine’ which incorporated aspects of Islamic Sufiism, Hinduism and Christianity. It also wasn’t fully conversant that during his reign he was very ruthless in war, often having towers constructed using heads of the conquered. History also states that his harem housed almost 300 wives and concubines, including two more Rajput betrothals. Jodhaa was definitely one of the more prominent figures in his life, but again her name has been called into question by present day feudal lords.

Sold as a union of faiths and communities, in reality (and as per historical accounts) Jodhaa would have converted to Islam; after all, for a heritage that has utilised the power of the sword to rule and conquer other civilisations through sheer might, force and barbarism, defiance on the domestic front would simply not be an issue. But then other positive real aspects of Akbar’s personality offset this and give balance, especially his real concern and appreciation for his people as a whole. Blame it on artistic licence – or for want of a better spun yarn…

This is isn’t a patch on Lagaan, but then it’s hard to improve on perfection. Still this has more pathos than Gowarikar’s previous outing Swades and keeps you very much entertained. A grand romantic spectacle, the likes of which can only be appreciated on the silver screen. If you can forgive the running time and the winsome third quarter, this is really worth a dekko. Magnificent – but take a cushion.