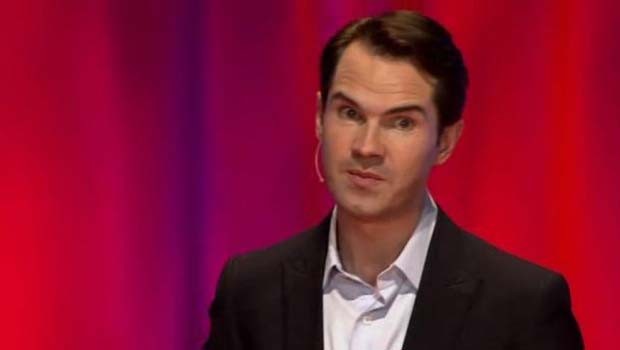 Summary: Few other comedians can keep the seemingly neverending jokes coming without ever slowing down.

Jimmy Carr’s no-nonense jokes that are so quickfire that he’s often moved on to the next before you have a chance to finish laughing have always been offensive. One minute he’ll have you chuckling about rape, the next it’s about fat people. Carr rarely strays into talking about celebrities or current affairs – his strengths have always been in poking fun at everyday issues or the simple things that don’t make sense when you think about them. Of course, being Carr, all “everyday issues” have crass solutions such as the best way to warm up pensioners in the winter is cremation. Jimmy Carr Making People Laugh sees the satirist perform at the SECC in Glasgow in a show said to be “too rude for television”.

The statement is a claim that’s probably quite right. Never has Carr been firing quite as low as he does here. Among the 250 gags, the one liner specialist reveals some of his innermost thoughts and addresses the chapters he would have in his autobiography. Carr’s show is loaded with observational classics as ever, though neither of these themes give him much of a chance to put a spin on his comedy. His Joke Technician tour saw him challenge himself to tell as many jokes as possible in a restricted time which really played upon his abilities while he also manages to reveal possible the shorteset gag ever told. Here the two elements designed to liven up proceedings feel laboured with a few dodgy graphics to make them seem more interesting. However, the crux of Making People Laugh sees Carr on solid ground.

It’s hard to ever laugh along with Carr without a bit of an “oooh” afterwards – he has no fear when it comes to offending anyone in the room and that goes for the hecklers too who he takes on with aplomb. The Scots make for game targets as he criticises their culture at every opportunity, such as Dundee girls giving head for chips and every Scotsman being unemployed. He admits it was a risk to get the DVD filmed in Scotland as he battles another good-humoured heckler, but this is another excellent live show from Carr with two hours of material. Few other comedians can keep the seemingly neverending jokes coming without ever slowing down. He’s still making people laugh, and long may it continue.