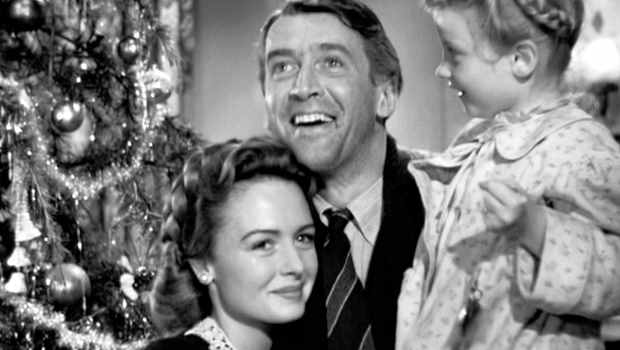 Ah, Christmas. A time to rejoice. A time to eat until your slightly overhanging belly turns into a paunch. A time to spend the equivalent of Poland’s GDP buying presents for people you don’t really like very much. And sadly, a time to moan once more at the paucity of decent Christmas films on our television sets.

If this year you feel like taking your viewing experience into your own hands, there are a couple films to buy on DVD which you can whack on, just in case all you have is a choice between The Santa Clause and Jingle All The Way.

You would be hard-pressed to find two films that imbue the spirit of an old-fashioned Christmas in the same way as It’s A Wonderful Life and Holiday Inn. Both are classics of the old-school, the kind of films that although painfully dated in terms of gender and race relations, totally rise above any anachronistic elements they might display, thanks to some timeless performances, fantastic music, and the kind of feel-good loveliness that should, by rights, ooze out of every Christmas film.

Put simply, Frank Capra’s It’s A Wonderful Life is a perfect example of the director’s inestimable talent for filmmaking, and one of the purest movies ever made. Capra doesn’t try and provoke his audience, or dazzle them with his technical wizardry – he simply wants them to finish his film with a big, goofy smile on their faces. And it’s an aim that is achieved with the utmost success.

From this very basic premise (that one man’s life touches the lives of many more around him), Capra produced a film which is ripe with the kind of goodwill-to-all-mankind vignettes which should cause tears to prick at the most cynical of eyes. It’s A Wonderful Life is simply jam-packed with the kind of magical movie moments that it can be honestly said simply aren’t seen anymore. This is in no small part thanks to some note-perfect performances from a large cast of character actors, topped off by the pairing of the sexy yet motherly Donna Reed, and the superlative Jimmy Stewart. Their scenes together are gold-dust, particularly their early flirtation when they first meet, and if anyone isn’t affected by the line, “You want the moon? Just say the word and I’ll throw a lasso around it and pull it down”, have empty rusks for souls.

Holiday Inn is a very different kind of film, but no less enjoyably Christmassy. In fact, Holiday Inn marks the introduction of the tune that, arguably, defines Christmas in the modern age – Irving Berlin’s ‘White Christmas’.

Holiday Inn is far lighter in narrative than It’s A Wonderful Life, which is unsurprising given it’s a musical. The immortal Bing Crosby (still the most successful recording artist the world has ever seen) and Fred Astaire (whose initial screen test elicited the comment: ‘Balding. Can’t act. Can’t sing. Can dance a little’) star as Jim Hardy and Ted Hanover, a pair of entertainers who both on-stage and off woo the ladies in their lives through singing (Bing) and dancing (Fred). After losing out to Ted in the affections of their leading lady Lila Dixon (Virginia Dale), the rather lazy Jim jacks in showbusiness and starts what he sees as a far easier life as a farmer in rural Connecticut. After soon realising that shovelling hay all day don’t pay, the still-lazy Jim decides to turn his farm into an all-singing, all-dancing Inn that’s only open on the various holidays in the American calendar. Along the way he hires the help of aspiring entertainer Linda Mason (Marjorie Reynolds), who he quickly falls in love with. However, when Lila dumps Ted for a new lover (described by Ted’s agent as, ‘A Texan. From Texas’), Ted turns up drunk at the Holiday Inn and proceeds to dance with Linda. The next morning, he knows he’s found his perfect dance partner, but can’t remember who she is. The rest of the film follows Jim’s attempts to make sure that history doesn’t repeat itself, and that Ted won’t run off with the girl Jim loves.

All of which is just an excuse for what makes this film to occur as much as possible – the music of Irving Berlin as sung by Bing and danced to by Fred. And that’s pretty much all you need as a reason to buy this film. Although ‘White Christmas’ is a fab song, there are plenty of others to equal this musical masterpiece (you’ll be singing, ‘Ha-ppy hol-i-days. Ha-ppy hol-i-days’ long after the film has ended). And as for the dancing – well, even if you are more of a Gene than a Fred kind-of-person, there’s no doubting that Mr Astaire, although looking like the kind of guy who does your accounts, was blessed with a physical style and grace that, quite simply, makes him a joy to watch.

It’s A Wonderful Life is not replete with great extras, but this doesn’t matter because it’s such a brilliant film. However, the DVD does have a montage of old interview footage from Frank Capra and Jimmy Stewart pasted together and fronted by Frank Capra Jnr, and there’s also a short documentary hosted by Tom Bosley (Mr Cunningham from Happy Days. Or if you’d prefer, Father Frank Dowling). The documentary isn’t great, but is a joy to behold, just for the footage of ol’ Tom standing by the fire in his living room in a sweet jumper, giving a brief introduction and then saying, ‘Hi. I’m Tom Bosley.’ You really want him to say, ‘You may remember me from such DVD featurettes as….’ a la Troy McClure. But he doesn’t.

Holiday Inn, although the lesser film, beats old George Bailey hands down when it comes to extras. This is in no small part thanks to the Daddy of DVD extras, Big Ken Barnes (who also provided most of the extras for the Citizen Kane Special Edition, probably the best DVD of 2003). As well hosting a great documentary about Bing and Fred along with Fred Astaire’s daughter, Ken also gives an interesting little breakdown of how they used to shoot song and dance numbers ‘in the olden days’. Extras for Holiday Inn also include some very informative production notes and cast and crew profiles: did you know, for instance, that Bing Crosby was an advocate for the legalisation of marijuana, and that the name ‘Bing’ is Vietnamese for peace?