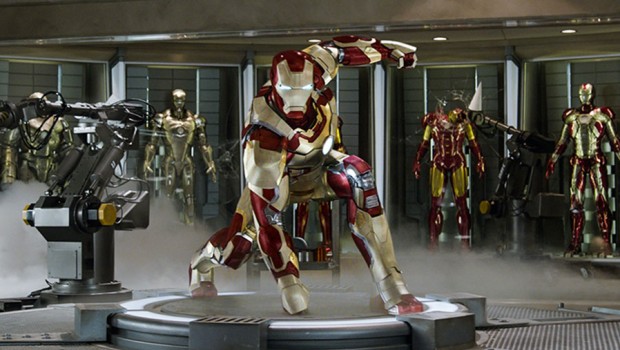 Summary: This is a lot of fun; spectacular set pieces, lots of laughs, and always on-point.

In Tony Stark’s world we’re at the conjencture, where the conundrum that is the final part of a trilogy rears its ugly head. Unsightly, as one has to make the decision to do or die… or in layman’s terms – whether to continue, conclude or effectively reboot the Iron Man trilogy. Here Marvel definitely go all out to deliver a whopper of a finale, I wont however divulge the final path taken…

Iron Man 3 sees a rather less cocky (initially at least) and slightly more introspective Tony Stark (Downey Jr.) re-telling an anecdote from the eve of the Millennium. Spirits are high, and we’re on the precipice of something quite spectacular. In betwixt a one-night stand with Scientist Maya Hansen (Hall) and New Year’s Eve festivities, Stark finds himself arrogantly dismissing bumbling scientist Aldrich Killian (Pearce), who’s looking for backing in his endeavour AIM – Advanced Idea Mechanics. We later find out, that it has the power not just to tap into the human mind, but also to help humans regenerate from horrific injuries, with incredible results.

Fast forward to present day, and post some ‘Avengers Asssemble’ mayhem in the recent past, Stark has advanced his craft so that his eponymous Iron Man suits can work independent of him, or well, he’s getting there… At the same time, the world is being held to ransom by sinister warlord Mandarin (Kingsley) whose allegiances and aims are never all too clear. He bombs places seemingly randomly, with obtuse references and reasoning to justify his attacks. When Stark’s former bodyguard (Favreau) is injured in one of the explosions, he delivers an emotional, somewhat overt challenge to Mandarin. When the latter comes to obliterate his Malibu villa, we get yet another inkling that Stark’s arrogance is coming back to bite him, with a vengeance.

Iron Man 3 is a white knuckle ride with whistles and bells on; and it works as a standalone movie, with the antagonists less personal than in previous instalments. It’s based around the popular Extremis storyline from Iron Man comics, which really gives Visual Effects the opportunity to ramp things up to another level. The movie seems a lot more action-oriented as opposed to story driven, but then looking at the new helmer this should come as little surprise. After directing the first two films, Favreau passes the baton to the legendary – Shane Black, who wrote action classics such as Lethal Weapon, The Long Kiss Goodnight and Kiss Kiss Bang Bang. A prodigy in the realms of Hollywood, that became the first script-writer to command a cool $1 million for a script.

Despite a seemingly more commercial take on things, Downey Jr. keeps to type with a character maybe all the more human than before, especially when confronting his own mortality, and that of those close to him. He regular suffers from anxiety attacks, and shudders at the mention of New York thanks to the last inter-galactic Marvel battle. Despite his confidence taking a knock, his wit, irreverence for authority and smart one-liners are thankfully still very much intact. Do keep an eye out for the fantastic team building scene based around Air Force One!

Paltrow is as gorgeous and idyllic as ever, Kingsley – brilliant, with Cheadle apt as the re-branded Iron Patriot (why oh why did you have to replace Terrence Howard!??). Pearce looks fab too, and handles his character’s transition believably. To say any more, would give much away.

This is worth a watch whether you’re an Iron Man fan or not. If you haven’t seen the first two, they defo provide you with some context… That aside, this is a lot of fun; spectacular set pieces, lots of laughs, and always on-point. Kevin Feige (Head Honcho at Marvel Studios) knows his world, and how to steer his movies all too well to ‘Blockbuster’ territory. This will I fear, become textbook definition in how to create not just a movie series, but a movie world. Go Team Tony, and of course – Team Marvel.