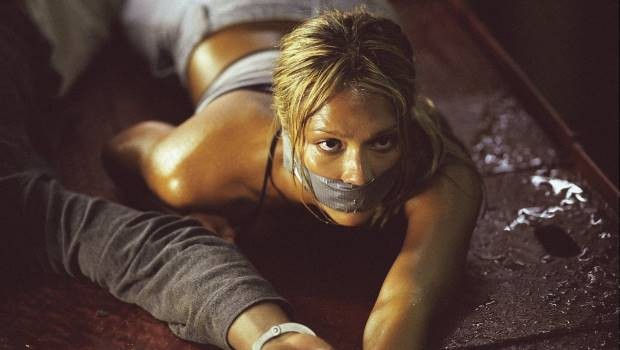 Into the Blue Review

Summary: There’s enough here that bucks the formula to recommend it, and the showdown at the end is surprisingly brutal for such a sun-kissed feature.

In this glossy and guiltily entertaining film, Paul Walker plays Jared, an impossibly toned amateur salvage operator in the Bahamas looking for the big score that will make his name and let him set up house with his beautiful girlfriend, Sam (Jessica Alba). Taking their sleazy lawyer friend Bryce (Scott Caan) and his new girlfriend Amanda (Ashley Scott) on a diving trip, they discover a wrecked plane on the ocean floor that’s stuffed to the gills with cocaine. It’s also immediately adjacent to the wreck of the Zephyr, a legendary pirate ship that was rumoured to contain tens of millions of dollars in gold – and that’s in 19th century prices.

Being law-abiding types, Jared and Sam ignore the easy drug money and want to concentrate on the salvage, but unscrupulous Bryce and his ‘coke whore’ girlfriend are more interested in the cocaine. When they try and interest some local gangsters in the haul, Bryce and Amanda find that these dangerous characters own it in the first place, and want to force Jared to get it back. Double cross follows double cross, leading to a satisfyingly grisly shark-infested finale.

Technically, ‘Into the Blue’ is an action thriller about two young treasure hunters in the Bahamas getting caught up in drug running and big-money salvage. In reality, it’s an extended love letter to the concept of beautiful people getting wet in immodest swimwear. The spectacular underwater photography is used to excellent effect, and lingering shots of a barely-clad Alba remind us why we’re all here in the first place. Alba and Walker, while not turning in performances of any great depth or subtlety, are very likeable leads, and manage the rare feat of being ridiculously toned and perfect without making the viewer despise them. John Stockwell directs with a good sense of pace and an eye for the beauty of the Bahamian locations.

There’s just something very well meaning about this film that can’t make me dismiss it out of hand. The casting, the locations, the concept – all scream Hollywood cynicism with both eyes on the teenage multiplex market. But there’s enough here that bucks the formula to recommend it, and the showdown at the end is surprisingly brutal for such a sun-kissed feature. Undemanding, but certainly entertaining.