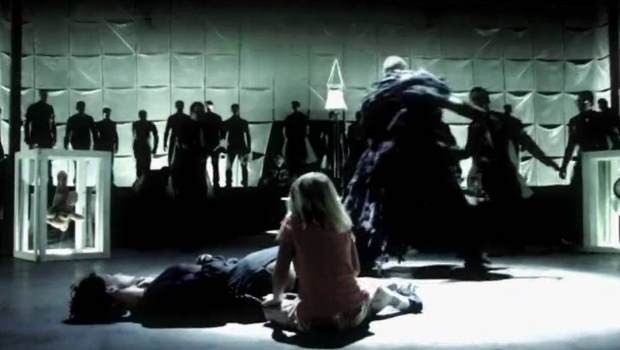 Summary: Cleverly crafted and hugely rewarding, Ink is destined to be a cult classic.

A low budget sci-fi thriller that looks a million bucks, Ink was made for as little as $250,000 but writer/director Jamin Winans spent every cent on getting the look just right to draw comparisons with The Matrix, Inception and Pan’s Labyrinth. Though it’s not just an impressive visual style that has ensured Ink became an Internet sensation, it’s also an intriguing fantasy tale drawing on a imaginative battle between the givers of dreams and the conjurers of nightmares.

Ink follows the father/daughter relationship of John (Kelly) and Emma (Duffy) as a center for exploring this alternate dimension. Widowed John has become obsessed with his job and drugs, losing custody of young Emma in the process to his wife’s parents who look after her. For him, life has become all about work while Emma hardly knows her dad anymore. Into this fractured relationship comes the twin forces of the Storytellers and the Incubi who are locked in a battle against each other. The naturally beautiful Storytellers visit when people are sleeping, providing them with content dreams while the Incubi, dressed in black jackets and ghastly television-screen faces, haunt others with nightmares. Out of this world comes a rogue, disfigured creature called Ink who steals Emma’s soul to take to the Incubi as a sacrifice to make good on a secret deal he has made with them In the real world Emma falls into coma, leading to her Storyteller protector Allel (Batter) to seek out help from her friends to save her.

Winans adopts a non-linear narrative that veers between the real world, that of the Storytellers and the nomadic existence of Ink to dreamy effect. There’s no straight up explanation of how the Storytellers and Incubi are related to each other, where Ink has come from or what must be done to save Emma but it all becomes clear by the end – it is the journey to that understanding that proves so rewarding. Ink’s missions sees him jump in an out of portals between dimensions using a pair of mini drums draped around his neck while battling with Storytellers and visiting a range of bizarre characters including a woman obsessed with hair and wedding dresses.

Meanwhile, the Storytellers seek out John to think of a way to alert him to Emma’s situation in hospital, finding him watched over by an invisible Incubus in the real world which will eventually sparks an all out brawl between Storytellers and Incubi that oozes panache and style. Winans uses lighting tricks and clever editing for a series of kinetic on-screen clashes, though the real triumph to Ink is the care and attention that has gone into putting a potentially tricky idea for a story into a cohesive movie.

Though it’s not easy to follow initially as more questions than answers seem to spring up with every scene, it’s a tactic that pays off handsomely by the end when everything clicks in the vein of The Fountain and The Usual Suspects, only with more emotion. Cleverly crafted and hugely rewarding, Ink is destined to be a cult classic.