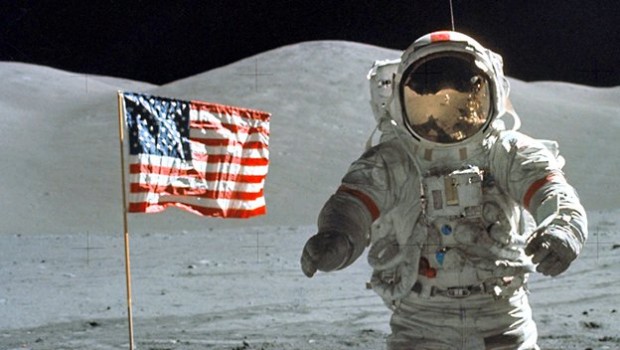 In The Shadow of the Moon Review

Buzz Aldrin, the second man to set foot on the surface of the moon back in 1969, was apparently no fun at parties. Known as ‘Captain Rendezvous’ by his NASA colleagues, his snappy nickname came not through luck with the ladies, but from his enthusiasm for discussing in-flight ‘rendezvous’ protocol during down-time. Still, probably best to stay focused on the job in hand when you’re part of a three-man crew charged with carrying American, and indeed global, hopes and dreams where no man has gone before.

It’s the anecdotal details that make In the Shadow of the Moon such an engrossing experience. Centering on talking-head interviews with most of the twelve astronauts who remain the only humans to have set foot on another world, director David Sington matches their testimony with stunning archive footage. Focusing on their personal reactions to their historic experiences, the film is at its best when exploring the lesser-known aspects of the Apollo missions. With the poignant exception of the combat in Vietnam, where the men would’ve been flying bombing raids with their other pilot buddies if it wasn’t for the space program, the astronauts reveal a general ignorance of the cultural revolution sweeping the nation at the time. Instead they were busy puzzling over the gargantuan task of realizing Kennedy’s lofty ambition of achieving a lunar landing before the decade’s end.

The men were all clearly humbled by their experiences, describing the emotion of the launch, spiritual ‘epiphanies’, and the simple fact of missing the Earthly weather system on the barrenness of the moon. Interestingly it’s Michael Collins, the frequently overlooked third member of Apollo 11 who didn’t get to set foot on the moon, who provides some of the most insightful comments. Using a phrase that typifies the astronauts’ collective ability to take it all in their stride, he remembers feeling “mildly worried” throughout the flight, as he accompanied Neil Armstrong and Buzz Aldrin on their epic mission. Sharp, down-to-earth (pardon the pun) and cheerfully self-deprecating (“If I screw up, three billion people are gonna watch me screw up!”), he more than makes up for the reclusive Armstrong, who it seems has never been comfortable with the profile-boost instigated by those small steps.

Although Sington briefly explores the political motivations for the space program, the question is put to bed with a few shots from the archives of Kennedy’s flag-draped coffin. Sington’s less interested in the program’s Cold War origins than he is in celebrating the awe-inspiring stories and the pioneer spirit that emerged from a tumultuous decade. Otherwise, the only jarring element is his insistence on a brief overview of the Apollo 13 drama (the inclusion of a ‘Ron Howard Presents’ opening credit might explain that). The segment offers nothing new and is oddly shoe-horned into a pause in the account of Apollo 11. Still, it’s a small flaw that doesn’t manage to derail a fascinating account of the first chapter in human space travel.