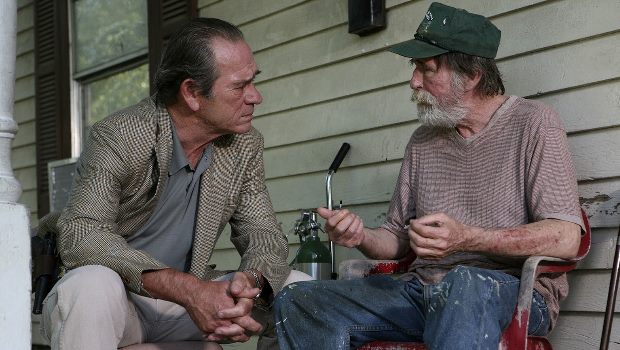 In The Electric Mist Review

Summary: Director Bertrand Tavernier tries his best, but it’s just not enough to raise the picture above your average thriller.

The sight of Tommy Lee Jones as a weathered law enforcer is commonplace in movies and such a frequent occurrence it’s hard to remember when he’s ever not played the good guy upholding justice. He plays the role so naturally you know he’ll get to the bottom of a case or catch up with the baddie soon in a round-about style, which works best with a compelling story and tight action. In The Electric Mist features another assertive performance from Jones as tenacious cop Dave Robicheaux, though even with a supporting cast that includes Mary Steenburgen, Peter Sarsgaard, John Goodman, and Kelly Macdonald, there’s a shortage of narrative coherency to keep you hooked.

Robicheaux’s investigation starts when he pulls over movie star Elrod Sykes (Sarsgaard), filming a Hollywood flick in his town of New Iberia, Louisiana making use of the surrounding swamps and woodland for a civil war epic. The flash A-lister is stoned and drunk, leading to a ride to the police station in which he reveals the crew has unearthed the decomposed remains of a man killed decades earlier – a murder the detective witnessed as a teenager but failed to report. Robicheaux soon realises that the murder may be connected with the recent crimes of a serial killer who targets young prostitutes. It’s the start of a trip back to Ribicheaux’s past in order to solve a puzzle of now but while there’s a good 45 minutes of solid investigating, the other 45 seems to be filler material.

The sleazy side of Hollywood filmmakers gets a sizeable airing thanks to Goodman’s fine performance as by local crime kingpin “Baby Feet” Balboni who is funding the movie. His skirmishes with Robicheaux are tense battles of wits and maintain a keen sense of danger throughout. Indeed Jones, who features in every scene, gets the best from his supporting cast, though despite the source material being James Lee Burke’s award-winning bestseller, In the Electric Mist With Confederate Dead, a clear story is lost in the translation to the big screen.

Robicheaux’s investigation is littered with discussions which muddy the waters of who is doing what to who and there is a moralistic element that struggles to find a footing amid the seedy behaviour on show. Unlike No Country for Old Men which also has a similar Jones starring role and seeks to show an ageing law enforcer growing tired of battling criminals who will never change their ways, the characters doing wrong are neither realised enough to be analysed or morally challenged enough to be facing dilemmas which call for tough decisions. Director Bertrand Tavernier tries his best bring in a few of life’s lessons to add gravity to the journey and up the heart rate with a dash of gunplay, it’s just not enough to raise the picture above your average thriller.

EXTRAS
Behind the scenes ‘Journey Through The Mist’.