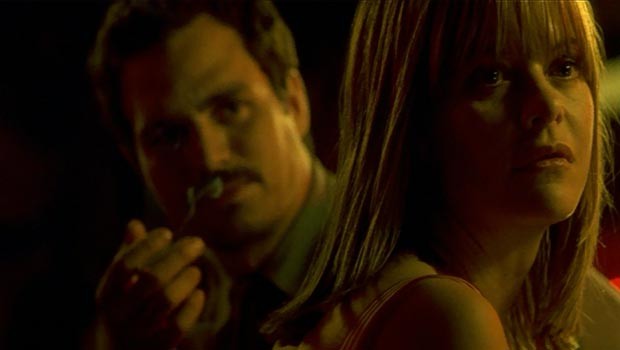 In the Cut Review

Summary: Ultimately, however, In The Cut is too weighed-down by its portentousness.

In The Cut, Jane Campion’s latest directorial outing, is yet another indie-feeling movie that will divide cinema audiences. Is it a gripping psychological love-story with a career-best performance from Meg Ryan? Or is it a load of pretentious, sub-Freudian tosh that sees a trout-lipped Meg Ryan shedding her clothes to save her career? The answer, as always, is somewhere in the middle.

Frannie is an intelligent but reserved and ultimately lonely writing professor living and working in New York. Her composure and general perception of her own life is shattered when she witnesses a sex act in a local bar (by sex act, read blow job – full on, erect penis, blow job), which unleashes a torrent of unhitherto experienced sexual passion.

Fortunately for Frannie, the brutal murder of a local woman whose body is found in her garden brings into Frannie’s life the gruffly alluring (in a Freddie-Mercury impersonator kind of way) Detective Malloy, who is more than happy to fill her newfound desires, kindly informing her that he is happy to wine and dine her or, if she’d prefer, shag her senseless from the outset. She chooses the latter.

In The Cut is driven from the tension created by this dichotomy between Frannie’s deeply felt desire for her new-found beau and the possibility that he might actually be a rather nasty serial killer with a Scotchguard-unfriendly penchant for claret. To add to the confusion, the story throws in a whole variety of would-be killers: Kevin Bacon ‘hamming’ it up (he he!) as John Graham, Frannie’s ex-boyfriend-cum-stalker who also happens to be camper than a van; Sharrieff Pugh as Cornelius, Frannie’s mysterious young student who is writing a paper about the ‘innocence’ of John Wayne Gacy; and Malloy’s loutish and uncouth partner Rodriguez (Nick Damici) who apparently likes fat chicks.

These potential red herrings remove just enough doubt from Frannie’s mind regarding Malloy’s serial-killer status that she feels brave enough to occasionally shack up with him. And it is for this that In The Cut, wrongly or not, will most be remembered: the film that saw Meg Ryan’s ass get munched on by someone who looks like they are about to burst into a rendition of ‘Bohemian Rhapsody.’

There is little doubt that what Meg Ryan does throughout In The Cut is very, very brave. It is also looks very, very silly. Ryan has secured a position for herself in the pantheon of modern cinema as the definitive girl-next-door. With her kooky, expressive mouth and little wrinkled eyebrows, Ryan has excelled in films such as Sleepless in Seattle and When Harry Met Sally, undoubtedly the best romantic comedy since Annie Hall. Ryan has made her money and received her adulation by playing cute, whimsical, high-maintenance kind of gals who fake an orgasm in a deli because they are game enough to do so. Not by playing erotically-awakened literature professors whose sexual gymnastics would impress ladies who are actually on the game.

So when the Megster gets all hot and bothered and writhes around in the throes of passion, although you can’t help admire the fact that in a world that wants their women to look like 12-year-old boys she is displaying her fortyish-year body for all to see, at the same time you can’t help but chortle at how staged it all looks. The extremely graphic nature of proceedings tips everything over into parody, until you find yourself more interested in Ruffalo’s impressive ‘tache than in any of the grunting and groaning that appears on the screen.

The fact that the sexual content of In The Cut is going to dominate debate surrounding the film is a shame, because there is almost as much to admire as there is to mock. Jane Campion is a very interesting director, and the film itself looks wonderful. She uses New York brilliantly, and orchestrates some of the scenes to their full, often horrifying affect (the pedestrian handling of a crime scene, in which the killer has thrown the dismembered body parts of a young woman into a large, industrial washing machine particularly stays in the mind).

Campion also knows how to cast a film well – Ruffalo is superb as the enigmatic ‘tec, and apparently spent hundreds of hours with hard-bitten cops to inhabit the part as well as possible, and Jennifer Jason Leigh puts in yet another nice turn as Frannie’s lovelorn, vulnerable and ultimately tragic step-sister.

Ultimately, however, In The Cut is too weighed-down by its portentousness – it’s to-the-point-of-ridiculousness sex scenes, it’s constant Freudian references (the film begins with a very real and engorged penis, and ends with a very large metaphoric one) and perhaps worst of all, Frannie’s achingly annoying habit of reading poetry on the tube.

In The Cut is by no means a poor film, but there are not enough interesting parts to make for a satisfactory whole. It remains to be seen whether audiences will accept the new Meg Ryan, and whether the controversy caused by her calculated move to completely reverse her perceived image as an actress, will give her career the much-needed boost she is seeking.