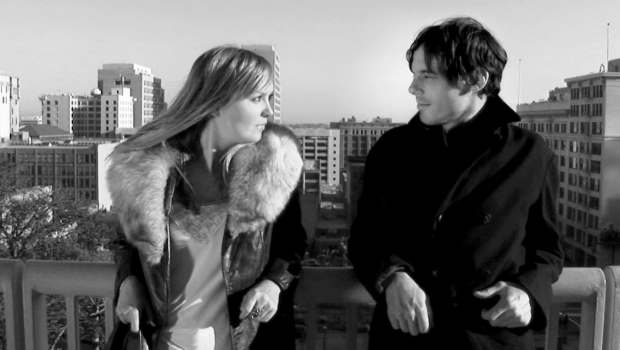 In Search of a Midnight Kiss Review

This micro-budgeted drama, set in LA over New Year’s Eve 2005, has an air of over-familiarity to its set-up; Wilson (Scoot McNairy), a lonely, out-of-work writer posts a desperate message (“misanthrope seeks misanthrope”) on an internet dating site, and hooks up with Vivian (Sara Simmonds), a beautiful, sharp-tongued, aspiring actress with serious relationship issues, and the two wander the city’s streets, hoping for some kind of connection as the new year begins. Last year’s indie hit Once and Richard Linklater’s classic Before Sunrise immediately spring to mind, which goes some way to explaining why Midnight Kiss was largely ignored by audiences, despite some glowing reviews, on its cinema release earlier this year. Its arrival on DVD will hopefully see it recognised as a great movie in its own right, as despite its similar feel to these others it has an equal charm all of its own.

Added to this, the two lead performances are perfectly pitched; McNairy as the decent, quietly spoken guy whose life is plodding along, but under the surface he is crying out for something more, while Simmonds is beautiful and mouthy, her spiked put-downs hiding a brokenness that we know will eventually be exposed. They come together wonderfully, with McNairy’s comic timing particularly great as Wilson double-takes in response to Vivian’s frankness.

At the heart of the film is an understanding that everyone needs to know judgement-free acceptance in order to feel truly loved, and the beauty of this graceful ideal is summed up in a discussion that Vivian and Wilson have about the ‘anonymous postcard project’. Holdridge then clearly demonstrates how difficult it is in practice, as Wilson reveals a deeply personal secret and Vivian reacts in disgust; the exact opposite of the attitude she has just praised. It’s in this moment that Midnight Kiss goes beyond being a nice, warm relationship movie (which it is), to digging into deeper, more profound areas of what it means to really love and be loved.

The DVD also comes with a handful of deleted scenes, the best of which gives us just a little more chat between Wilson and Vivian, and a very short Making Of where Holdridge calls the film “a plea for people to be a little bit nicer to one another”. Best of the extras is the commentary, with pretty much everyone involved in the film talking about how they made it happen on such a tiny budget; really interesting stuff full of inspiration for anyone trying to get their own movie off the ground.

“You don’t notice anyone else in the cinema the whole time, but as you leave girls smile at you.” by Neil Johnson 4/5 Read more…