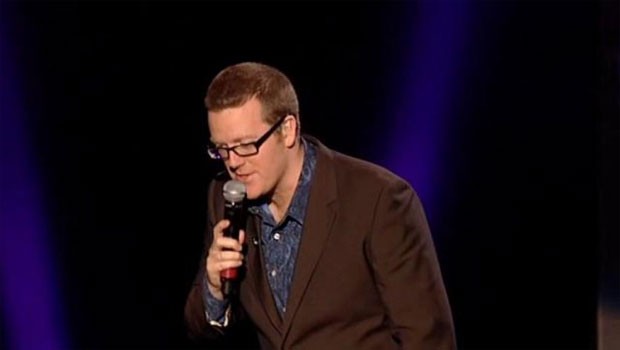 If I Could Reach Out Through Your TV and Strangle You, I Would Review

Summary: if you're willing to laugh harshly, you'll laugh a lot.

The imaginative Ross Noble likes to keep his stand up improvised and the dead pan stylings of Jimmy Carr can be so crude as to be unrepeatable but Glaswegian Frankie Boyle likes to do a little of both. His straight-talking stand-up requires him to think on his feet as he interrogates the audience then dish up his own take on celebrities and life in general. If I Could Reach Out Through Your TV and Strangle You, I Would marks the end of Boyle’s stand-up career at London’s Hammersmith Apollo where he delivers an uncompromising attack on everyone and everything – with a particularly wicked description of Andrew Lloyd Webber’s face and a helpful reminder of where you were when Michael Jackson died.

In the words of Frankie Boyle: “I don’t give a f*ck anymore – I’ll say what I like.” And he doesn’t mince his words when he does either. Striding confidently around the stage he picks out almost every audience member in the front row to quiz about their life, occupation and anything else he can poke fun at with this dry humour. At one point he finds a couple who have brought their children. Looking a little too young for 99 percent of Boyle’s jokes, their bravery of sitting in the front row is tested when he tells them their mum knows they masturbate… and she masturbates too. An uncomfortable drive home awaits. The idea of words causing cruelty is dismissed when Boyle complains people rarely understand when comedians and joking – despite that being their job – and though he often aims low, he’s rarely off-target.

If Boyle was an assassin, he’d be merciless. He snipes at famous people as accurately as he does those who have paid to see him, even taking in Obama’s disappointing presidency which has become more and more questionable when compared to the promise it was thought him winning the election would deliver. Never shy to talk about sex in a glib fashion, always damning about the economy and offering a cynical view on life in Scotland, Boyle’s 75 minutes on stage is not for the faint-hearted – he’s offers little in the way of compassion. But what he does so well is lambaste all he knows well and if you’re willing to laugh harshly, you’ll laugh a lot.