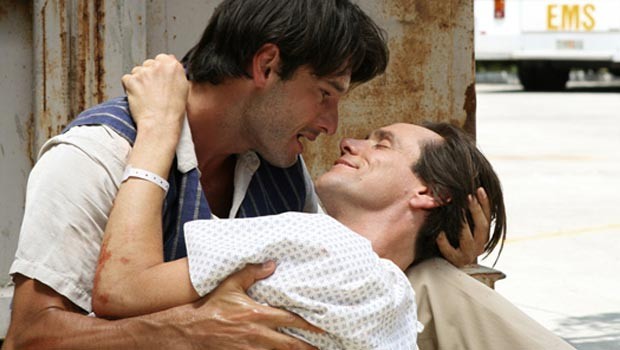 I Love You Phillip Morris Review

Summary: Fluffy and fun, though you need to be in the right mood to fully appreciate it.

Jim Carrey and Ewan McGregor sharing an on-screen kiss in I Love You Phillip Morris is a far cry from the serious connotations of Jake Gyllenhaal and Heath Ledger doing the same in Brokeback Mountain as this quirky camp comedy revels in its light and fluffy exterior. It’s a tale of a con man and love at first sight based on a true story, and while the writer/director team behind the deliciously black humoured Bad Santa again pull out a few shocks, the heart-to-heart moments are soppy to the point of sickly.

Steven Russell (Carrey) appears to be an average, everyday guy without a care in the world. He’s got a well-respected career with the local police force and a doting wife in Debbie (Mann) to look after his children. However, his idyllic lifestyle is all part of a smokescreen to cover his real desires as Steven is a con man through and through.

For starters, he didn’t join the police force to uphold the law. Adopted as a child, he just wanted to join the local police to gain security clearance to find out who his real mother is so he could track her down. And secondly, he’s deceiving his wife – he’s actually gay. We’re informed of all this through a mixture of zealous narration from Carrey and a few eccentric moments, though he keeps those more low key than usual. There’s not much time to get a handle on his current predicament before Steven is involved in a car crash and realises he should embrace the fact he’s gay and stop living a sham life.

So he quits his marriage and finds himself a boyfriend, as well as listening to his vibrant taste in fashion. Only problem is, to fund his new-found love for all things glam and to keep his lover happy, he winds up conning others again – this time for money, not emotions. It’s not long before he’s on the wrong side of the law for once and finds himself banged up in jail where he meets one Phillip Morris (McGregor) who could well be the man his heart has been waiting to meet.

The build up to Steven’s meeting with Phillip is played at a breakneck speed there’s hardly time to pause for breath as the story whips along. Carrey’s on form with his fast-talking and goofy faces, playing up the camp role though he pushes the film into the realms of silly sit-com. Things take a turn for the cringe when Steven lays eyes on Phillip and it becomes a campy rom-com in the spirit of McGregor’s Down With Love as they enjoy a star struck romance. Though the pair throw themselves into their roles, there’s a sunny outlook on everything which often makes for a flimsy foundation.

But then maybe that’s the point: this isn’t a forbidden love story that dominates gay cinema, it’s brazenly open. To that extent the main quibble is that the black humour isn’t always dark enough to offset the brightness – or perhaps I’m just a cynic. I Love You Phillip Morris is fluffy and fun, though you need to be in the right mood to fully appreciate it.