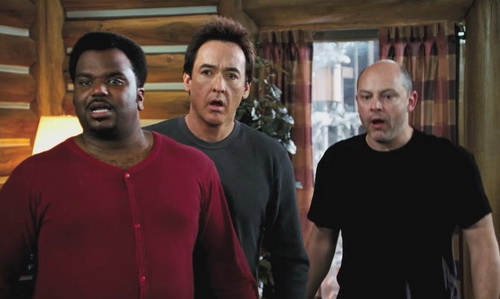 This year’s contender for wackiest concept for a slacker comedy goes to Hot Tub Time Machine – surely the most out-there device for time travel since Dr. Who first used a police box. Yet, despite the naff-sounding name which could easily have been a throwaway offering, it’s actually one of the more fun comedies which sees grown men reduced to acting like teenagers. Not because they want to, but because they essentially have to be.

Hot Tub Time Machine sees three friends seek out a wild weekend away back at the ski resort where, in their teens, they enjoyed a madcap few days of getting up to no good on the booze and trying to get laid. For them, it’s a necessary port of call as Adam (Cusack) has been dumped by his girlfriend, Lou (Corddry) is a party guy without a party and Nick (Robinson) is fed up with his wife having total control over his life. However, even back in their old haunt of Kodiak Valley they struggle to find the same mojo they had in 1986, especially with Adam’s geeky young nephew Jacob (Duke) in tow. Things take a turn for the more interesting when one drunken night in the hot tub, they travel back to 1986 and are given the chance to retrace their steps and relive their golden memories to improve their futures.

Though the older men go back in time, they do so in their present state of mind so rather than see them as teenagers, we see them as their future selves which makes for an amusing conflict of power as the 40somethings fall back into their old social ranks. Although Jacob hadn’t actually been born, he still winds up back in the past which you may scream “paradox” at, but the cleverest element of Hot Tub Time Machine is it exploits the situation to much amusement, including Nick phoning his then-toddler wife and Lou struggling to overcome a fear complex over his former nemesis while spending most of the movie drunk.

John Cusack tends to pick either mainstream pap or hip indie flicks and Hot Tub Time Machine falls somewhere in-between. It’s got all the hallmarks of the typical gross out humour seen in American Pie copycats but by putting the adults in the teenage bodies gives this offering an Old School edge in which the comedy often comes from the way is it acted by a cast who are more than happy to throw themselves into their roles, literally in the case of Corddry who gets into all kinds of fights with a seeming impish rival from his past. Though it might not sound the most intelligent piece of cinema, co-producer Cusack and director Steve Pink who wrote both High Fidelity and Grosse Point Blank – two of Cusack‘s finest moments – strike a chord once again, with some smart humour amongst the more obvious teenage rights-of-passage situations with an added bonus of Chevy Chase in a cameo role.