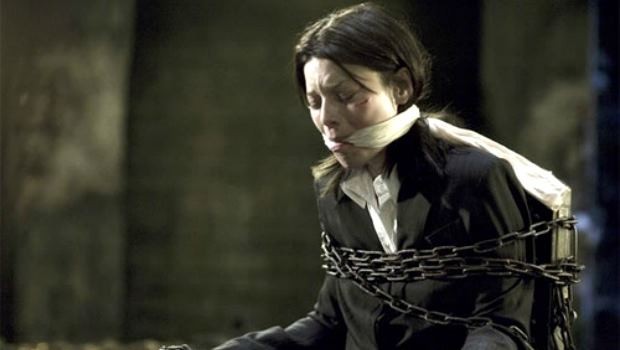 Summary: While worth a passing glance from strong-stomached viewers interested to keep in-touch with the genre, we can only hope that Roth’s best work is yet to come.

Eli Roth continues his gleeful (d)evolution of the torture sub-genre with this inevitable sequel to his own 2005 head-turner. After offing the original’s sole-survivor in the opening minutes, we meet three young female students searching for life-experience in the relative wilds of eastern Europe. Lured to a quiet corner of Slovakia, they fall victim to a vicious underground organisation that offers wealthy businessmen the opportunity to torture and kill abducted backpackers.

While the original Hostel claimed to push the boundaries of horror cinema and only half-delivered on its promise, Roth has produced a sequel which is undeniably superior but still an utterly frustrating ride aimed squarely at the late-night multiplex audience. The trio of sprightly victims-to-be are another case of Meet The Stereotypes. There’s Lauren German’s Beth (smart and sensible), Heather Matarazzo’s Lorna (shy and geeky) and Bijou Phillips’ Whitney (rich, easy and asking for trouble). Aware that the gore is the show’s selling-point, Roth spends forty minutes cranking up the tension in the build-up to the inevitable. His cardboard cut-out characters move ever closer to their torturous demise, but the lack of either visual or verbal subtlety, from the portrayal of every European male as shifty and sinister to the doom-laden and invasive score, constantly undermines the viewing experience for all but the most dedicated horror fans.

Of far greater interest is the parallel story thread that follows two American businessmen who have signed up to dole out the torture in the privacy of their own Slovakian dungeon. While one is pumped-up and eager to experience the kill, the other is withdrawn and reluctant to confront his sadist streak. As we follow them from breakfast with the kids in suburban America to the torture-room in Slovakia, Roth dares us to see their bloodlust in ourselves; why else, after all, would anyone sign up for a film where the primary appeal is (at times extremely) graphic scenes of torture? It’s a question that elevates the film above its predecessor, but, despite a genuinely surprising twist in the film’s final act, Roth ultimately doesn’t have the skills (or even inclination) necessary to explore this dark side of human nature with any great substance. He’s first and foremost in the business of giving the audience what they want, and the occasional subversive poke at the fact that there’s an audience for it in the first place, is merely a smart by-product. While worth a passing glance from strong-stomached viewers interested to keep in-touch with the genre, we can only hope that Roth’s best work is yet to come.