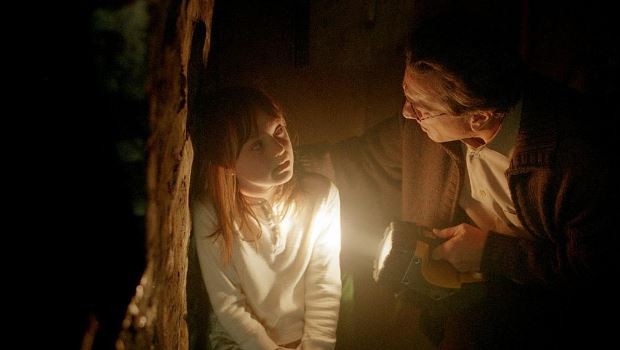 Summary: The highlight for me was when a fire alarm inexplicably went off, but that bit wasn’t actually in the film.

Ok, so the argument that Robert De Niro doesn’t really try and act anymore is a bit tired. In this reviewer’s opinion, the last good film he made was arguably 1998’s Ronin – and even then I attribute that down to John Frankenheimer’s taut direction. However, it was with a slightly higher-than-average level of interest that I approached this film. Simply put, it is De Niro in a psychological horror, a genre that the once great man rarely does anymore. Unless of course, you count The Adventures of Rocky and Bullwinkle.

Ho ho, I thought. As Hide and Seek is a horror flick, it might require him to show a greater range of emotions than his usual flurry of frowns, smirks and the occasional ‘hilarious’ gurn. Is it me, or is watching De Niro act nowadays rather like the first time you notice that your dad is getting on a bit? A once great man, whom you admire greatly for his dynamism and vivacity, starts shuffling instead of walking, wears a particular cardy a bit more often than is good for him and spends the entire time mumbling about the central heating and drainage. Perhaps, Hide and Seek is the opportunity for Dad to start getting a second wind?

Here De Niro plays David Calloway, a troubled psychologist who is coming to terms with the suicide of his wife by moving into a labyrinthine country house in upstate New York with his traumatized daughter Emily, played by the ubiquitous Dakota Fanning. Soon Emily starts opening up by talking about her new imaginary friend ‘Charlie’, with whom she plays Hide and Seek, her favourite game that she played with her mother. However, when a potential new love interest for David comes on the scene, played by Elizabeth Shue, Emily’s behaviour becomes increasingly sinister and a series of mysterious and gruesome acts leads him to imagine the unimaginable: Charlie may actually be real…

There is very little to recommend about this film. This is a standard thriller-by-numbers. All the horror clichés are present and correct: Autumnal setting, howling gales, a deeply freaky child in the centre and possibly the most ridiculously spooky house since Norman Bates opened for business. And it doesn’t stop there, as we also have slightly unnerving neighbours floating around, a score punctuated by children singing and an even more ridiculously spooky wood behind the ridiculously spooky house. The kind of wood so ridiculously spooky you would immediately destroy it with an industrial flamethrower and build a massive Toys R Us in its place, environmental principals be damned. And this David is a psychologist! Couldn’t he see what effect this place would have on his daughter? It looks like a movie set from a horror film for Christ’s sake!

Apart from a few obvious shocks, the film isn’t particularly scary. John Ottman’s score, so important in films of this genre, pushes all the right buttons but still remains flat. Ottman has written such wonderfully atmospheric music for films such as The Usual Suspects and X2 but here his usual flourish seems rather muted, just like the rest of the film. As is customary these days there is a twist, but it feels as though it was written just for the sake of having one thrown in, as it very obvious and unsatisfying. In fact, the highlight for me was when a fire alarm inexplicably went off, but that bit wasn’t actually in the film and we had to almost leave the cinema. Sadly, there was no fire and we had to stay and watch the rest of the film.

Anyway, the only performance worth mentioning is by young Fanning, who is utterly convincing as Emily, and gives the role a subtlety and maturity rarely seen in a child actor, even more so than Haley Joel Osment did in The Sixth Sense. It’s not that the other performances are bad, they’re just pretty functional. Any supporting players are just there to move the narrative along, with Shue and Famke Janssen – as David’s ex-student and close friend – not really given much room in which to manoeuvre and so they just play it straight. As for De Niro, he does do the occasional scream and look of passing panic but on the whole it is another sleepwalking performance. This is a real shame as the role does have potential to really deliver a great performance, despite the rather hackneyed script. If he carries on this way, perhaps its time for someone to give him back that cardy, along with a cup of milky tea and a catalogue of new boilers to browse through.