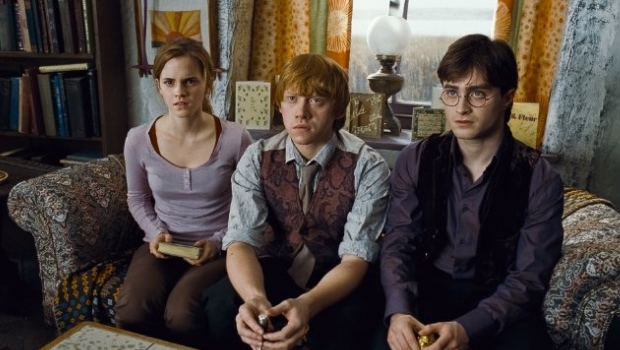 Summary: A terrific set-up to the final chapter of our favourite boy wizard's saga.

The bigwigs at Warner must have been dreading this day; the end of the Harry Potter franchise, and a guaranteed chunk of change for the studio. Some bright spark has found a way to delay the inevitable, by splitting the final book into two parts. In some ways this is an excellent idea; as Rowling’s source novels have grown ever more biblical in proportion, the film adaptations have suffered. A more leisurely pace may benefit the story, and allow us to remember who the characters are and what they were doing when we last saw them. On the other hand, the last book does consist of chapters, nay reams, in which not a lot really happens; there’s plenty of fat to cut. We can only the extra potential length won’t be squandered on endless scenes of Ron and Hermione bickering.

After the death of Professor Dumbledore in Harry Potter and the Half-Blood Prince, Harry (Daniel Radcliffe) and his two best friends Ron Weasley (Rupert Grint) and Hermione (Emma Watson) decide not to return to Hogwarts School, where they were due to complete their final year. Dumbledore leaves them enough clues to convince Harry that they are meant to be finding the way to kill the evil wizard Voldemort; in Half-Blood Prince, Dumbledore had discovered that Voldemort had discovered how to make horcruxes – a way of splitting the soul into pieces and placing the pieces in objects in order to ensure immortality. Find and destroy the horcruxes. So far, so simple.

Except that Voldemort now rules the wizarding world… and Harry, Ron, and Hermione are fugitives. And Dumbledore, infuriating even in death, has left them clues that are more mystifying than helpful. Why, for instance, is a collection of old children’s stories so important?

For those who have been dead or on Mars, Harry Potter, the boy wizard, was of course first a literary and then a cinematic phenomenon, though the first two films, directed by Home Alone’s Chris Columbus, were criticised for the pedestrian nature of the adaptation. It was only with the third installment, and the vision of Alfonso Cuaron, that the series came to life. Cuaron also succeeded in coaxing credible performances out of the child leads, who until then had delivered their lines with all the emotion of planks. Since then, the franchise has gone from strength to strength, helped by the increasingly grim nature of the source material. The wizarding world has changed from a cosy place where the most important thing was winning points for your boarding house at school to somewhere much darker, where no-one is safe.

Deathly Hallows Part 1 is once again directed by David Yates, who previously took the reins on Order of the Phoenix and the Half-Blood Prince, which may be a bit of a disappointment to those who had hoped Cuaron would return for the final installment. However, Yates did a fine job on Phoenix, the most unwieldy of the novels, though Half-Blood Prince was less satisfactory. If he can find the form that he achieved with Phoenix then we are in safe hands. Also returning, in addition to the three leads, are Helena Bonham Carter, Robbie Coltrane, Tom Felton, Ralph Fiennes, Michael Gambon, Brendan Gleeson, Richard Griffiths, John Hurt, Jason Isaacs, Alan Rickman, Fiona Shaw, Timothy Spall, Imelda Staunton, David Thewlis, Julie Walters and Bonnie Wright.