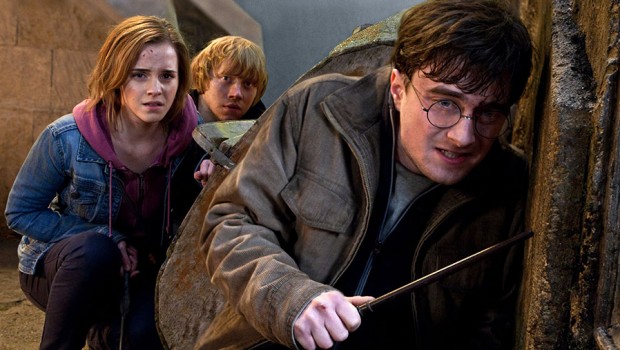 Summary: A fitting end to a series that, despite a few hiccups, will stand the test of time.

Seems hard to believe that we’ve had ten years of Harry Potter, harder still to believe that this is the boy wizard’s final outing. So, where were we? Oh come on – by now either you already know, or you don’t care.

Previous Potter films have been criticized for uneven pacing and lengthy running times; Deathly Hallows 2 is actually the shortest at 130 minutes. There’s a tiny bit of exposition to remind us that Harry (Radcliffe), Ron (Grint) and Hermione (Watson) are still seeking the Horcruxes and then immediately we are plunged into a thrilling set piece that culminates in the intrepid trio escaping from Gringotts Bank on the back of a dragon. And from there, it’s back to Hogwarts, where what’s left of the Order of the Phoenix, with the help of the teachers and students and an army of statues must defend the school against Lord Voldemort (Fiennes) forces. For the first time we get a real sense of the size of the wizarding world (even if it is through CGI), rather than just the same few characters, really bringing home what is at stake.

And what is at stake is important. The core of the Harry Potter stories is love and friendship, and how they can triumph over death. Over and over again Harry is told that he is loved; that his mother’s love saved him from Voldemort’s killing curse, but now, only at the end of all things, do we learn about another love, perhaps even greater because unrequited – the love that Professor Snape (Rickman) felt for Harry’s mother. And because of that love, Snape turned his back on Voldemort; that such an unpleasant and conflicted character is also the hero, in many ways, of the Harry Potter books, belies much of the criticism levelled at Rowling. (These aren’t just children’s books and films. The children who started at Hogwarts with Harry in 1997 are now in their mid-twenties.)

So we see Hogwarts smashed to rubble. We see characters die, and we see them mourned. And we see Harry himself come to terms with his mortality. Most surprisingly of all perhaps, we see Neville (Lewis), who seems to be morphing into Clive Owen, rallying the troops and declaring his love for Luna Lovegood (Evanna Lynch). Most of the iconic moments from the novel are included, and, pleasingly, the Hogwarts setting means that many of the adult actors get a share of screentime that was missing from part one. Even Professor Trelawney (Thompson) shows up, while Maggie Smith clearly relishes the opportunity to show Professor McGonagall’s naughty side.

What is also striking is how meticulously plotted these stories are. Everything comes together; the Chamber of Secrets, the basilisk venom, Parseltongue, polyjuice potion, the castle ghosts… there’s no fat here, though thankfully we are spared the sight of Peeves singing about ‘Voldy going mouldy’. Marvellous stuff, and a fitting end to a series that, despite a few hiccups, will stand the test of time. I look forward to watching the box set when the DVD comes out. Potterthon! Bring it on.