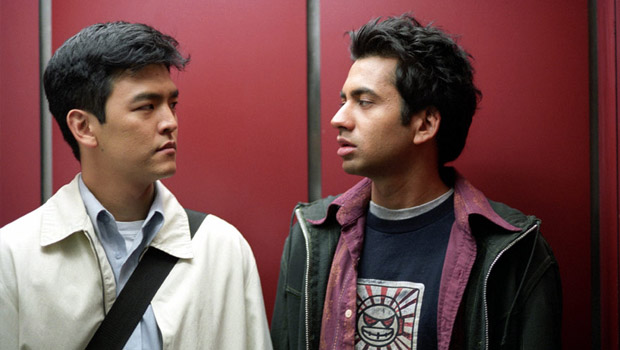 Harold and Kumar Get the Munchies Review

Summary: This film didn’t do that well in the US, where people can be a bit funny about race. This seems a shame as it was a lot of fun.

Billed in the US as Harold & Kumar Go To White Castle (presumably retitled due to the lack of international outlets of the White Castle franchise) and starring That Asian Guy From American Pie and That Indian Guy From Van Wilder, Harold & Kumar get The Munchies is an inspired slice of stoner silliness and a deeply enjoyable 90 minutes.

Harold (Cho), a shy and put-upon investment banker, shares an apartment and a love of weed with Kumar (Penn), a slacker medical student. One Friday night the two get stoned and, seeing an ad for White Castle burgers on tv, decide to go and get some. The nearest White Castle is in New Jersey, so they head off to the wild hinterland around Newark in search of sustenance and the adventure of a lifetime. In the course of one night the intrepid duo take on local gangs, corrupt cops, in-bred yokels, a tripping Doogie Howser, MD, and a possibly rabid raccoon.

There’s nothing particularly new or clever about Harold and Kumar; it’s an unpretentious road trip rammed full of gross-out humour, but its just bloody good fun. Episodic in structure, our heroes’ odyssey is continually being derailed as they try to buy dope at Princeton and have to run from campus security, get their car stolen, hitch a lift from a boil-covered mountain man, perform a life-saving operation, spend some time in prison, and finally hang glide their way to Nirvana – and some really odd looking little burgers. The acting isn’t fantastic but it doesn’t really matter. The movie sets out to make you laugh and it succeeds.

There are some inspired comic moments, especially one involving Wilson Phillips ‘Hold On’, which I’ve been singing ever since! Another winning scene is Kumar’s fantasy marriage to an enormous bag of weed, starting out blissful but swiftly degenerating into routine irritation and boredom. The comedy is character-driven, and as the story goes on Harold especially gains confidence, learning to stand up to bullies and get down with girls, but none of this is laid on too heavily. The script also plays with stereotypes of Asian and Indian Americans and immigrants and makes some surprisingly subtle points about racism. But it never lets this get in the way of a filthy joke.

The film ends in a way that leaves it open for a sequel, but apparently it didn’t do that well in the US, where people can be a bit funny about race. This seems a shame as it was a lot of fun.

DVD extras include: commentaries, cast and crew interviews, The Art of the Fart documentary (showing how the sound designer captured the evacuations of strangers in order to create the Battleshits scene), deleted scenes and outtakes, A Trip to the Land of Burgers and Drive-Thru Bites.