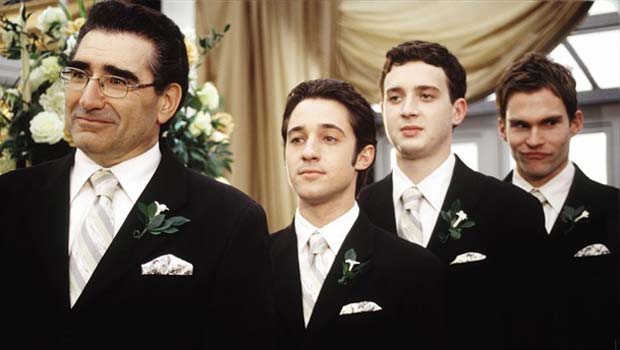 Summary: A good example of a polished cast playing characters they know well, and is probably going to be the best date movie of the summer.

Jim, Michelle, Stifler and the rest of the gang return for one more slice of the pie in another likeable, if crude, comedy.

If you liked American Pie, you’ll doubtlessly find something to enjoy in American Pie: The Wedding. Shelving the deadwood cast members that caused the second Pie film to be the cinematic equivalent of the saggy bags underneath Tara Reid’s eyes, writer/producer Adam Herz and director Jesse Dylan have fashioned together a movie that continues the mixture of chuckles and gross out moments which proved so popular the moment Jim shoved his schlong in warm baked goods.

The opening of American Pie: The Wedding pretty much indicates the standard and intentions of the rest of the film. James Emmanuel Levenstein (a solid Jason Biggs) is attempting to propose to his very own band camp geek Michelle Flaherty (an effortlessly amusing Alyson Hannigan) in a busy restaurant. Misconstruing his efforts, Michelle takes it upon herself to start pleasuring Jim under the table. Jim’s dad (the splendid Eugene Levy) walks in to give Jim the engagement ring he has unknowingly left at home, and starts offering well-intended advice about marriage while his son is, simply put, getting sucked off.

The scene has the key ingredients to the film’s success: familiar characters behaving in familiar ways; the expression of warm, sentimental feelings; a witty script, and a huge amount of smut thrown in for good measure. Unfortunately, as was the case in the previous two films, when confidence in witty comedy fails, the makers of American Pie feel it necessary to overcompensate with the smut. Which is why this latest installment ebbs and flows in waves of humour and likeability, as it swiftly moves from scenes which display a good understanding of the comic strength of the cast, to scenes which display a lazy reliance on gratuity.

Ostensibly, the film’s plot has two main strands: the first sees Jim trying to make sure that the most important day of his life goes to plan, and the second sees Steven Stifler (Seann William Scott playing a role which fits like a glove he’s just wiped his ass with) try and woo Michelle’s fit sister Cadence (a bland January Jones) by playing against type i.e. by being a well-brought up, sensitive young man. What passes for plot, however, is just an opportunity to present set piece after set piece, some of which work beautifully (Stifler having a ‘dance off’ in a gay bar), and some of which don’t (an unnecessarily extensive bachelor party scene which is just an excuse to show some fake tits).

The strength of American Pie: The Wedding however, is that it has whittled itself down to a strong cast which can pull off all of these set pieces. This third instalment only features actors with a good sense of timing (Biggs and Hannigan) or who inhabit an infectiously amusing character (Scott). Gone are the likes of Chris Klein, Tara Reid and Mena Suvari who looked so uncomfortably pointless in the second film. This ruthlessness has given American Pie: The Wedding a streamlined and more sophisticated feel, allowing more room for superb character actors such as Levy and Fred Willard (as Michelle’s dad) to effortlessly steal the film from its young stars.

Another change in the American Pie brand is that it is now prepared to tackle weightier issues other than the prospect of losing one’s virginity. Although condescending, the film has a vague ‘it’s OK to be gay’ theme which, whilst not ground-breaking, does express the message that it is fine not to be completely dominated by a red-blooded, breast-obsessed heterosexuality (and as many 14 year old boys will undoubtedly watch the film, this is a useful message to express). The film also doesn’t totally shy away from the problem it raises – the fact that one of the prospective newly-weds is clearly very Jewish-American and the other is very clearly Irish-American. True, the film doesn’t exactly tackle the thorny issue of ‘inter-marriage’, more taps it on the shoulder and asks it politely to go away, but at least it recognises it as in issue in the first place. Of course as soon as it’s recognised, the film tries as hard as it can to make the issue go away (and does so by making sure that the main stumbling block to the marriage, Jim’s grumpy Jewish granny, gets real happy by one of the boys, who plays an unsuspecting Harold to her lascivious Maude). Yet the film at least shows an attempt to rise a little bit out of the quagmire of teen movies, and is all the more enjoyable because of it.

American Pie: The Wedding ain’t going to win any Oscars, but it is a good example of a polished cast playing characters they know well, and is probably going to be the best date movie of the summer. As such, it is more than likely that a next instalment will be winging its way to multiplexes in the not too distant future. American Pie: The Circumcision, anyone?