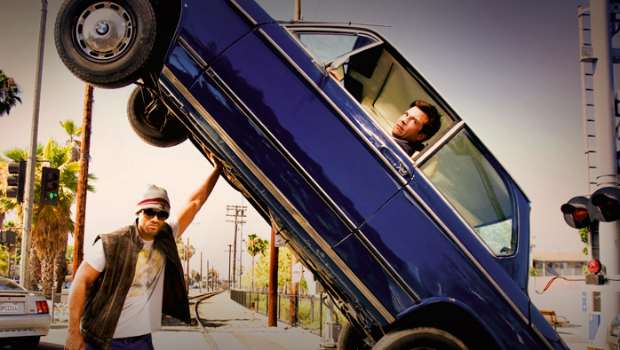 Summary: Ultimately, an unsatisfying missed opportunity to have fun with the current mainstream blockbuster genre of choice.

Will Smith just can’t make a subtle leading man – every film the American superstar takes centre stage in, it’s hard for anyone else to make an impression. Hancock is no different. As rough and ready superhero John Hancock, he is one of a kind: the swagger of the Fresh Prince of Bel Air meets Superman on a marathon post break-up binge drinking session. This guy is the ultimate superhero everyone loves to hate. He may have immense strength, be indestructible and have the ability to fly, but he is also an alcoholic who acts so casual he’ll cause millions of dollars worth of damage in the process of arresting a few armed felons. Smashing into road signs, destroying the cars of innocent drivers and leaving the criminals in a car skewed on the spike of a tower aren’t really that helpful when the local authorities come to total up their annual repairs budget. Hancock is anything but the orthodox superhero setting standards for his fans and upholding the law by leading as an example. Yet this promising set up of a satirical look at the comic book genre so over-used in recent summer blockbuster seasons soon becomes the very thing it wants to mock: an overly serious, self-important myth-making exercise too concerned with special effects and dramatic showdowns to care whether it makes any sense: it’s reliance on Smith to haul it through 90 minutes of scattergun ideas is embarrassing.

Writers Vincent Ngo and Vince Gilligan start their script strongly enough. Hancock is lazing around drunk, ridding Los Angeles of crime but under-appreciated by its citizens who see him as a hazard rather than a hero. When the saviour of a situation is causing more destruction than the villains, they are hard to like and Hancock is suffering from a serious public backlash. Enter Ray Embrey (Bateman), a publicist willing to transform his image from local menace to revered saviour.

The sight of an uncaring superhero gives the impression Hancock will be a tongue-in-cheek version of the acclaimed The Watchmen, putting superheroes into more realistic situations where they are feared by society as their human side undermines their benefits. The satirical side of the story sees a clumsy Hancock smashing up streets when he lands following a flying session and causing havoc despite having good intentions: his saving of a beached whale results in him tossing the stricken mammal back into the sea and obliterating a yacht in the process. Played for laughs using a shaky camera and a light-hearted style, it’s the comical take on the genre the makers of Superhero Movie could only dream of.

When Ray sends Hancock to prison to make up for his misdemeanours, there is genuine interest in how he will rehabilitate himself into the pride of LA, however soon after the film goes terribly wrong.

Despite appearing to want to put two fingers up to the superhero genre, a twist on the hour mark pushes Hancock into the very type of film it seemed keen to mock. The appearance of another with powers rivalling Hancock starts it on a route to closure, upping co-star Charlize Theron’s until then bit-part role to a ridiculous justification for Hancock’s existence. An abundance of special effects can’t hide the fact Hancock’s writers ran out of ideas half way and stumble through on a wave of borrowed ideas and haphazard plotting. Director Peter Berg keeps his shaky camera throughout to give the impression of an edgy thrill ride, but unless you have an unhealthy adoration of Will Smith you’ll be tired of the tangent Hancock shoots off at long before the credits role. Hancock had potential, and the trailers may give the impression it wants to be different, yet it winds up as shallow and unimaginative as your average high concept movie: nice try, but there just wasn’t enough thought put into the package as a whole. Silly, disposable and, ultimately, an unsatisfying missed opportunity to have fun with the current mainstream blockbuster genre of choice.