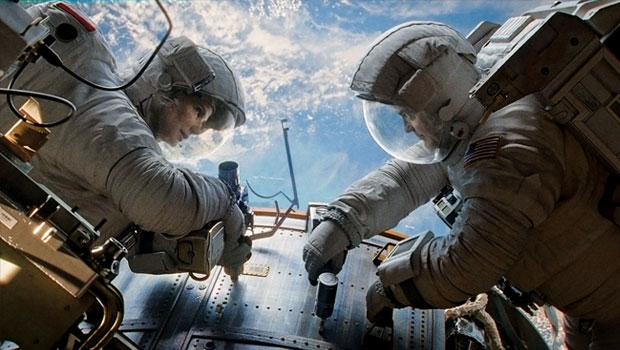 Summary: Surely there are Oscar nominations for all involved, and Gravity is set to be a classic. See it in the cinema, and see it in 3D - there's been nothing like it before.

Alfonso Cuarón proved himself a master of visual power in the cinema after the breathless Children of Men featured long takes from the heart of battlefields. Now he’s taken his eye for the spectacular into space with Gravity, a film that is possibly the most effective use of 3D yet. He and co-writer son Jonás stage a thrilling fight for survival as astronauts Ryan Stone (Sandra Bullock) and Matt Kowalski (George Clooney) become stranded while on a mission to deploy a satellite. What follows is an intense experience in the most convincing depiction of zero-gravity.

Gravity is all charming character and neat special effects from the off. We see the Earth from space and slowly a shuttle comes into view. It starts as a dot with distant radio chat, and as it creeps into full view on its orbit, a jet-packed Kowalski appears before us, casually chatting to NASA’s Houston control room as he flies around the space shuttle he piloted. Kowalski is the most experienced of the team, telling Houston stories they’ve heard before and joking he has a bad feeling about the mission. Two other astronauts are on a space walk: one enjoying the chance to float around while tethered to the shuttle, the other – Stone – busy finishing the setting up of a satellite for her research. It’s Stone’s first time in space so although she’s done all the simulator training, her first priority is focusing on completing her work without throwing up in her suit.

While this is all very much the calm before the storm, Cuarón’s use of a long, seemingly single shot which moves around the outside of the shuttle to introduce the characters gives a great sense of spacial awareness and looks as authentic as if they were really in space. We learn just enough of Stone and Kowalski to understand he’s space smart while she is just smart, which makes the next moments so impactful. Houston radio the crew to inform them a Russian satellite which was destroyed has caused a cloud of debris to head straight at them, and before they can get back to the shuttle, they are being battered by metallic parts. In the eschewing chaos the debris rips through the shuttle, killing all but Stone and Kowalski in devestating fashion, as well as sending Stone spinning out of control attached to the shuttle’s mechanical arm which has broken free of the shuttle and sending her into deeper space.

What follows is a onslaught of obstacles thrown at Jones and Kowalski as they try to regroup, find their way back to the nearest space station and get back to Earth from the most perilous position known to man. The tag line says life in space is impossible, and you really feel the struggles faced by the pair. The visual effects are top class, helped along by the Cuarón’s ensuring the dangers are never the same, but what ensures Gravity isn’t just an exercise for creating new special effects is the performances from Clooney and, in particular, Bullock. Clooney is in laid back, calming influence mode so it is Bullock who takes the lead in conveying the sense of panic and fear to us. She does impressively, giving us someone we can relate to so we can root for them throughout the film. Surely there are Oscar nominations for all involved, and Gravity is set to be a classic. See it in the cinema, and see it in 3D – there’s been nothing like it before.