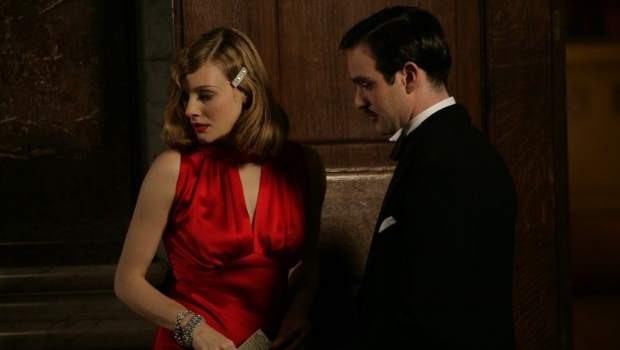 Summary: Glorious 39 succeeds in showing how far the line became blurred before it was crossed fully for many innocent victims.

Stephen Poliakoff’s first feature film for 10 years goes back to the beginnings of the Second World War for inspiration and brought on board a stellar British cast for a mystery thriller. Steeped in English heritage as both an ode to the last weeks of freedom in the 1930s and its sudden end brought by the outbreak of war making for an atmosphere of suspicions, Poliakoff’s return serves more as a history lesson than entertainment.

Glorious 39 depicts an idyllic pre-Second World War Britain where the upper class enjoy peace in their countryside stately homes. The Keyes family headed by father Alexander (Nighy) mix in the circles of power, keeping company with politicians such as Hector (Tennant), a man close to Alexander’s daughter Anne (Garai) and keen to see measure taken to prevent the war, and secret service men such as the shady Balcombe (Northam). While they have dinners together talking about the inner workings of governments, Anne has a more relaxed life with her brother Ralph (Redmayne) and sister Celia (Temple), but all that changes when she finds a recording which seems to be evidence of a sinister Nazi appeasement plot. When a close friend turns up dead, Anne tries to get the recording into the right hands, but instead finds herself fearing for her own life.

Glorious 39 is a mystery thriller that conspires against itself after a promising opening. The tranquil setting is all happy families where Anne’s dreams of fulfilling her potential of becoming a successful actress seem destined to become a reality – she has no worries as she recalls the days she would run around her home playing games with Ralph and Celia. Alexander, Balcombe and Hector hint at the tension arising between Germany and England, but there are no signs anything will disrupt Anne’s life, especially on Alexander’s watch – he is a man of leisure who seems quite unfazed by the war. Equally when Anne finds the recordings among Alexander’s file storehouse, hardly an eyelid is hardly battered to suggest they could be anything more than a dull documentation of generic government meetings.

Of course they aren’t, and nor are we fooled that is the case. With mystery thrillers that seed of doubt is there to grow and Anne’s hand is forced when Hector is found dead and she feels the urge to deliver the recordings to her love, Foreign Office official Lawrence (Cox). Initially Poliakoff sustains the tension as it isn’t clear who might be Anne’s enemies as she takes on the role of spy in reality, however much of the mystery is lost in a missing baby episode which hints at far more than it should. From there, the subtle warnings intended to be recalled at the end when the twist is revealed are signposted, the final scenes play out as awkward and confusing as to the motives for the extreme measures taken to keep certain people silent. When the mystery is lost, much of the thrill goes too.

Despite the weaknesses in the plot, the performances from some of British cinema’s finest such as Nighy, Julie Christie and Christopher Lee in a cameo fit their billing perfectly and Romola Garai is excellent as Anne, experiencing a rollercoaster of emotion trying to figure out who is toying with her attempts to do the right thing. As a depiction of how an age so brimming of innocence and freedom turned into one of suspicion and death by the outbreak of the Second World War, Glorious 39 succeeds in showing how far the line became blurred before it was crossed fully for many innocent victims. It’s just a shame it’s so easy to see it coming.